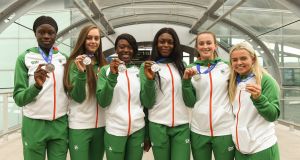 Something about being at the Cork City Sports on Monday evening took me back to the good old days. The atmosphere and the excitement and the crowds in the stand rising to their feet to cheer the athletes home.

There were fast times, competitive races, and nothing seemed impossible; the only difference being the surroundings at the Cork IT track rather than at the Mardyke where it all happened back in my days competing there.

Even without outright victories, Phil Healy and Marcus Lawler stole much of the show. Healy warmed up with a fast 100m, running 11.30 and just short of her recent Irish record, and just over an hour later recorded the fastest ever 200m by an Irish woman, and our first ever sub-23 seconds, finishing third in 22.99.

Lawlor also stepped up a gear in the men’s 200m, recording his fastest time of 20.40 seconds, and all of a sudden Paul Hession’s Irish record of 20.30 looks within reach – that set back in 2007, Hession also being the first Irish male athlete to make a European sprint final.

With less than three weeks to the European senior championships in Berlin, this is the sort of positive momentum that Irish athletics has been looking for. And the challenge now is to maintain that momentum.

One of the things that stood out for me about the junior athletes is that they lined up and jumped up against the best in the world believing that they belonged there and believing they could win medals. I’ve always believed whenever athletes get to a championship the least they can do is perform at their best, and we have seen so much of this over the past few weeks.

The days of one or two athletes saving face for the Irish team, outliers in their sport, seems to be a thing of the past. There is a proper depth of athletes that have been progressing through the years and when given their chance to shine on the European and World stage they have relished the opportunity. Together they pushed each other to deliver results we have never seen before in Irish athletics.

At times we have set the bar a little too high, or athletes tried too hard and failed instead of just working with what they have and gradually improving, always moving forward.

There’s also a fresh diversity in the Irish team, in every sense: in the sprints, the middle distance, and the field events, the high jump silver medal won by Sommer Lecky at the World juniors in Finland the evidence of that. We’re no longer limited to the traditionally successful middle- and long distance events, as much as we all love them.

Also, when you look back at the recent success in Hungary and Finland, many of the young athletes are not far away from senior teams. They don’t need to take giant leaps to get there – and what is also does is let the older athletes know these young nippers are eager to take their place whenever the time comes.

We’re seeing athletes born in the new millennium creeping into the top-10 performances by Irish athletes across a number of events. And this is only really focusing on the female side of the sport. The girls are leading the way but it’s only a matter of time before the young male athletes are also inspired to shake things up and get noticed.

Running has become a huge mass participation sport in Ireland, but in recent times there has been a divide between the top runners and the so-called fitness runners. The gap in the middle can also be filled, to put some pressure on the athletes at the top to continue to step up, and not just roll along in the comfort zone.

Looking at these changes in Irish athletics reminds me a little of the rise of Ireland again, after the fall of Celtic Tiger in 2008. It took a while before Ireland as a country appreciated what we are, who we are and what we have to offer. Sometimes the bar is set so high it is unattainable, but if you break things down and chase achievable targets it’s easier to reach greater heights.

I also think there is a fresh appreciation of the talent and ability of young Irish athletes. It was always there at the Irish Schools’ Championship, but what was not always obvious was the pathway to success beyond the school years.

Both the European Youth Championships and the World Junior Championships are the start of progression pathways, but athletes need to take each step as it comes, improving and progressing each year, so that they feel they are on a one-way street, where success is the only acceptable option to keep moving forward.

This belief, momentum and positive energy needs to be maintained and filtered through each team that goes away to compete, starting with the senior team in Berlin.

There’s no fear in our junior athletes, and once they have tasted success they want more, and most of them will find a way once they have their minds made up to achieve success.

Now is also the time to attract more financial support to help these athletes to continue to achieve success. There are many sacrifices that need to be made along this progression pathway, and many of these are financial. An athlete’s life is not always paved with gold, and many often struggle to make ends meet as they try to lead the life of a professional athlete.

It’s great to be praised and welcomed home at the airport, but to continue this lifestyle beyond school years and living at home we need to ensure the athletes are supported and assisted with their training and living expenses. Some will take the US college pathway which helps the gradual progression and exposure to racing, while others will be tempted by the lure of fame and exposure in Ireland.

No matter what path each athlete takes, they will all strive to come back together and keep up with each other at the championships. The rates of success are not always linear, and this is where Athletics Ireland need to be vigilant, to do all they can to ensure fewer athletes fall through the cracks and disappear.

What we’ve also seen over the last two weeks is the enduring attraction of the sport. We’ve all been lifted and absorbed by the recent success. There will be highs and lows for all these athletes over the coming years, but the promise is now there. Once you’ve touched success, no matter what level, you know it’s never too far away again.