Dual players should be celebrated, not driven away 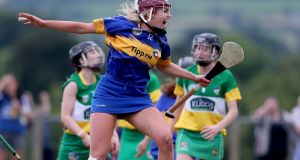 The last weekend in camogie and football kind of reminded me of a speech by Michael Healy-Rae in the Dáil. There have been loads of weird, wild, wacky and wonderful statements from him, but the one that sticks out in my mind is the one about the rhododendron crisis in the National Park in Killarney. Healy-Rae claimed that the army would be needed to eradicate the invasive plant species. Now, while the rhododendron crisis is a huge issue – people are getting lost in it – the vigour with which Healy-Rae wants to drive out the plant is similar to how the LGFA/GAA/Camogie Association want to drive out the even rarer species of the dual player.

The dual player is like much else in the wild these days – it’s a dying breed, being eradicated by the demands for growth and the basic science that sport has become so professional that you can only do one. That said, being from Cork, a dual star is like the natural lifestyle choice. Eoin Cadogan, Rena Buckley, Briege Corkery, Aidan Walsh, Jack Lynch, Teddy McCarthy, Jimmy Barry-Murphy . . . the list goes on. Add to that mix the new stars of Hannah Looney, Libby Coppinger and Meabh Cahalane and you can see even a dying breed can still produce one or two sensations.

It is attention that nobody wants. To be singled out just because you are good at two sports and can’t fulfil your potential at both

Yet a lack of communication and structure within the sporting season means that these players must suffer for excelling in more than one code, a feat that should be lauded. Just a few months ago, we had that bizarre and uncomfortable situation between UCC football team and Shane Ronayne versus the Cork camogie team and Paudie Murray. Let me tell you, my brothers and I used to watch WWE for a while and some of the promos shot by that most theatrical of institutions were less dramatic than the interviews given by Murray and Ronayne.

A battle emerged of who said what and when and how, yet, lost among the war of words were the dual stars being forced to choose between two sports they clearly want to be a part of and are good enough to play. The only winners in that particular spat were the media, who had fodder for days.

We all were hopeful that it was over and that that conversation would never strike up again. But the subject remains far from exhausted as Tipperary star Orla O’Dwyer found out last weekend. Having played with the Tipperary footballers in Nenagh against Kerry, O’ Dwyer was facing a trip to The Ragg to lead out the Tipperary camogie girls against Offaly on the same day.

It is attention that nobody wants. To be singled out just because you are good at two sports and can’t fulfil your potential at both. Season after season, dual players are consistently facing and making these unnecessary decisions. But after being promised things will be different, we witness the same decisions and the same players being affected. How are you supposed to encourage young boys or girls to take up as many sports as they want if the organisations governing these sports can’t even facilitate the child to play every sport?

Everything is different and not just in women’s sports. Young boys are joining academies, in rugby, in GAA, in soccer and as a result they can only focus on one individual sport. Kids as young as six should never be forced to solely focus on an individual sport. They should be allowed to excel until they feel it is right to make a decision.

If we want young talent to thrive and prosper we should dedicate time and resources to nurture it and to let it grow, not nip it at the bud and end all growth there. So, while Orla O’ Dwyer, Libby Coppinger, Hannah Looney, Meabh Cahalane and many others will continue to run on diesel and carry on flying the flag for this dying breed, it is time organisations came together and acknowledged there is an issue.

We should never discourage anybody from trying their hands at all sports, and if they want to take it further, that should be embraced too. These women and men are putting their lives on hold to try to be the best they can be, defy the odds and maybe inspire others. Perhaps, for once, we should allow them to do so instead of creating various obstacles and discourse around them.

Don’t channel a Michael Healy-Rae attitude and try and end it all by acting aggressively, channel your inner David Attenborough and marvel in awe at the talent on display before us. Hey, it might even lead to the evolution of a new breed of sports stars.