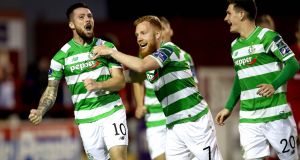 If the occasion here provided some small sense of where Shelbourne want to get back to, the gulf between the two sides gave a pretty clear indication of how far they have fallen since their heyday.

Well organised and industrious, they did enough to make their opponents put in a bit of a shift for their place in the last eight of this year’s cup but lacking the sort of quality that a bigger budget might bring, they were well enough beaten in the end with second-half strikes by Brandon Miele, Graham Burke and James Doona enough to secure the visitors a very rather comfortable win.

Ollie Byrne’s anniversary cast a bit of a shadow over it all but he was remembered respectfully by both sets of fans before the start of a game that would surely have set him scheming on how he might somehow fund an acquisition or two. The current regime, of course, witnessed at first hand how that turned out last time around.

Still, on a night like this it was easy enough to see where some of the Rovers money has gone. Stephen Bradley’s side always had enough about it to keep a lid on things when Shelbourne managed to threaten and they were by far the more inventive when pressing forward.

It had taken them a little while to really get going, however, for while they had had the better of the first half they struggled really to do more than camp for spells around their opponents’ area and create the occasional half chance.

Dean Delany had just one save of note to make, from Roberto Lopes, before the break, although he got off his line smartly enough to gather at Gary Shaw’s feet after the striker had chested a decent Graham Burke ball a yard too far in front of him and there was a let off too when Miele might have made more of a Trevor Clarke cross.

Had it continued like that, the hosts might well have fancied themselves to grab something late on against the run of play but any hopes they had of springing a surprise started to crumble within two minutes of the second half starting. Dave Webster kicked things off with a finely weighted ball beyond the Shelbourne defence for Burke and the midfielder then took his time before teeing up Miele.

Clarke set up the second for Burke with an impressive turn of pace as he powered forward from midfield and Doona wrapped things up not long after arriving on when Webster’s cross was pushed beyond Shaw but into the substitute’s path by Delaney.

Had the hosts got themselves back into it immediately after the first goal they might have rattled the Premier Division side sufficiently to set the stage for an upset but Rovers survived a goalmouth scramble that yielded two attempts on goal with Tomer Chencinski making his only really notable save of the game.

From there on, the locals were chasing things but never very fast. James English managed one more shot on target for his side while Rovers looked vastly more menacing at the other end. Somehow, Rovers still managed to conjure up a downside when Ronan Finn got himself sent off with the midfielder shown a second yellow for diving after he had picked up a first for a fairly needless foul.

His side are safely into the quarter-finals, though, and after so many disappointments since they last won this competition, a favourable draw might bolster the feeling that this might finally be their year again.

MCG could welcome 25,000 fans for Boxing Day Test 08:21
Gordon D’Arcy on a Halloween thriller; Will an empty Hill derail the Dubs? 07:51
Gordon D'Arcy: Ireland must conquer fear on a scary Halloween in Paris 07:55
Seán Moran: Will a silent, empty Hill help to loosen Dublin’s grip on Sam? 07:55
Dave Heffernan delighted to have banished bad memory of his first cap 06:00

1 Gordon D'Arcy: Ireland must conquer fear on a scary Halloween in Paris
2 Robbie Henshaw likely to be the only Irish change for France finale
3 Cian Healy: ‘Realistically I got away with murder when I was younger’
4 Cork City expected to approve €1 takeover by Preston owner
5 Seán Moran: Will a silent, empty Hill help to loosen Dublin’s grip on Sam?
Real news has value SUBSCRIBE
Crossword Get access to over 6,000 interactive crosswords