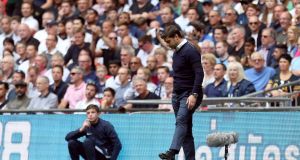 The webpage that allows Tottenham fans to watch their new stadium being built brick by brick via a “live cam” has probably been doing a bit more business since Sunday.

Maurico Pochettino and his players might reasonably hope for a better day at their temporary home next weekend when Burnley will be the visitors, but the defeat by Chelsea leaves them with one win in their last 10 games at Wembley and the fans will already be yearning for ‘The Lane’.

The sense of frustration, mixed with a little foreboding, that Marcos Alonso’s late winner left around the place was unmistakable at the end of Sunday’s game. Chelsea, whose away record against their London rivals had for many years been a thing of wonder (11 wins and six draws in 17 top flight visits to north London between 1989 and 2006), had not won in their last four visits to White Hart Lane and the two defeats had felt more pronounced than the two goal margins might suggest.

Over the weekend, the two runs collided, Chelsea came out on top and the ability of Tottenham to reproduce anything like the home form that helped them to second place in the league last year was thrown into even greater doubt.

Pochettino was understandably anxious to play down the significance of the venue in terms of the defeat and his side did dominate for long stretches although his assertion that the outcome simply came down to one side taking their chances tended to overlook the fact that Alvaro Morato could, and should, have had a goal in each half for the visitors.

The reality is that for all their possession, Spurs didn’t look genuinely superior to Chelsea here the way they had back in January when Dele Alli converted the home side’s only two chances on goal but Pochettino’s side dominated a side on the way to winning the title both out wide, where the fullbacks, particularly Kyle Walker, were outstanding, and in central midfield where Victor Wanyama and Mousa Dembele overwhelmed their opponents, comfortably eclipsing N’Golo Kante and Nemanja Matic.

That seems a fairly distant memory just now. Tottenham have already lost one more game at home in this campaign than they did in the last and, given the absence of Eden Hazard (injured), Gary Cahill and Cesc Fabregas (suspended) and Diego Costa (exiled), appear to have missed out on what looked a real opportunity to make a statement both about what Wembley will be like for other teams to visit, and the seriousness of their own intent during the year or so they will spend there.

On the first count, Antonio Conte chirpily suggesting afterwards that England’s national stadium will be somewhere Tottenham’s rivals will relish playing will have done nothing for the mood of Spurs fans after they had completed the journey home across the city.

As for their intent: that has been questioned more widely than ever since Danny Rose went public with his belief that he and just about everybody at the club deserves more than they are currently being paid.

It feels strange to suddenly regard any Premier League footballer as undervalued or paid but the suggestion over the weekend that Chelsea’s Tammy Abraham, a 19 year-old striker who has played two games for the London club, two for Swansea where he has just gone on loan and 41 for Bristol City where he went last year and, to be fair, did rather well, is on the same weekly wage as Alli is really pretty incredible. It might have put the Tottenham midfielder off his game if he read it in Sunday’s papers.

Tottenham’s inability to land big name targets has been widely reported and while the fans are justifiably chuffed that a player like Alli was brought to the club for just £5 million - you might have noticed that they sing about it quite a lot - it seems slightly comical when they boo somebody like Willian because he had opted a few years back for Stamford Bridge over White Hart Lane.

A Brazilian who was coming to Britain for the first time, the thinking was presumably that he could earn and, most likely, win more at Chelsea than he would working for Daniel Levy and that being the case it does seem that the supporters’ displeasure might be somewhat misdirected.

Willian apparently carts home between £10,000 and £20,000 more a week than Tottenham’s top earner, Harry Kane - who has to slum it on £100,000 after selling himself short in his last contract renegotiation. Alli is reported to be on half that and so, it seems, the pair earn fractionally less between them than Cesc Fabregas. It is probably best not to mention the likes of Hazard or the bigger names at the two Manchester clubs in their company.

Despite that pair having come to prominence at the club, it is the sort of situatio that can only be sustained for so long, and in order to do so you presumably have to be selling to the players in question one of those fabled “projects” that coaches like so much to talk about.

Talk of one at Tottenham would certainly seem plausible if coming from Pochettino but less so from Levy who has preferred to focus on the difficulties that might be encountered if the club loosens its grip on its salary structure.

The problem for the Argentinian and the supporters, who clearly, and rightly, rate him highly, is that Tottenham’s modus operandi will start to look a little like that of the club they regard as their real rivals, Arsenal, if they appear to be settling for top four finishes and Champions League football.

The difficulty of ‘settling’ for that should not be underestimated, particularly if you are failing to attract the biggest names and ultimately losing some of your own best players. It would be tough for Tottenham fans to have to start rationalising it all on the basis that it what fits in with the board’s business model, however impressive that might appear to be after the grief they have given Arsene Wenger and co. over the last few years.

At Arsenal, the talk was that everything would change once the back had been broken on the £390 million stadium debt but 11 years on there is no sign really of the club spending in the way its supporters would like it to.

Tottenham’s new ground is currently on course to cost twice as much as the Emirates did. The fans may be willing the construction workers on almost as much as the players this season but if things do not change soon then the mirthful mocking of Wenger might start to sound more than a little hollow.