Lack of a a robust, ball-winning defensive midfielder likely to be exposed at Anfield 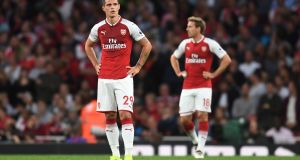 Granit Xhaka and Nacho Monreal of Arsenal look on after conceding a goal to Leicester at the Emirates Stadium. Photograph: Michael Regan/Getty Images

It turns out the switch to a back three was not a magic bullet, after all.

It is early days still, of course, but already the sense is that for Arsenal the move to the tactic du jour was just the 2017 version of their regular upswing in April and May.

Nobody has monetised mediocrity quite so well;hey are masters at stimulating optimism at just the right moment to maximise season-ticket sales.

The familiar tropes are already being wheeled out; the excellent record at Wembley (nine wins in a row if you include penalty shootouts, a run that presumably makes Tottenham’s struggles there all the more amusing for Arsenal fans); the terrible record at Stoke (one win in eight games); and perhaps most gallingly, the endlessly fragile midfield.

To an extent Arsenal were unlucky at Stoke last Saturday. Alexandre Lacazette may have been a fraction offside when he had a goal ruled out, but many officials would have regarded him as being level with the last defender. They had six shots on target to Stoke’s four – or, if that feels old-fashioned, they won 1.74 to 0.68 on Expected Goals.

It was, to an extent, just one of those days; it’s just that Arsenal keep having those days, particularly in Stoke.

And through it all, one thread endures. Arsenal may have started spending (relatively) big on players. They may at last have brought in a high-grade centre-forward (even if there are doubts about Lacazette’s contribution outside the box); they may finally have, in Sead Kolasinac, a physically imposing presence; they may even for once hold on to a want-away player (although it is probably best to reserve judgement on that for another week or so); but they still lack a commanding central midfielder.

Temporary solutions may at times have been patched together, but Patrick Vieira has never truly been replaced. That’s hardly a new insight and its discussion may provoke sighs of weariness but it remains as true as it has been for more than a decade.

Ottmar Hitzfeld, who won Champions League titles with both Borussia Dortmund and Bayern Munich, often spoke of the “red zone”, the central area just outside the penalty area.

A team’s first priority must always be to protect that, to try to avoid, as far as possible, opponents generating shooting, passing or dribbling opportunities from that area. That can be done by pressing, squeezing the space between the lines, or it can be done by having one or more holding midfielders sitting there, but what cannot happen is for central defenders to be isolated against an opponent with space in front of him.

One of the reasons for the recent success of 3-4-2-1 is that it has such a stable base: three central defenders protected by a screen of two holding players – the same trapezium shape that was the base of the W-M formation and that has returned to fashion as full-backs have begun to shuck off their defensive responsibilities, placing greater strain on the centre-halves.

Towards the end of last season, the shape seemed to bring some stability even to Arsenal. Yet Leicester rampaged through that space again and again on the opening Premier League game of the season as the two nominal holding midfielders, Granit Xhaka and Mohamed Elneny were too often drawn upfield.

Jesé Rodríguez enjoyed that space for Stoke as well, but his goal was less to do with shape than with Xhaka not performing the utterly basic task of following his run into the box.

Xhaka is a divisive figure but it is hard to see why. He may have averaged almost 90 per cent pass completion last season while making 2.4 tackles per game (although given he also conceded 1.2 fouls per game that is perhaps not quite such an impressive figure as it may initially appear) but

His apologists claim that his role is to create the play, keeping the ball moving, and there may be some truth to that, but nobody, whatever their role, can just let a forward run off him as he allowed Jesé to.

Besides, if that is Xhaka’s role, why doesn’t he have a more robust, ball-winning presence alongside him, somebody to act as a breakwater for opposition attacks? The issue is particularly acute at Arsenal given the lack of defensive cover offered to the back of the midfield by Mesut Özil.

In a world of increasingly universal players, in which they are all expected to be able both to pass and to perform basic defensive functions, Arsenal seem increasingly anachronistic, the problem exacerbated by Arsène Wenger’s refusal to sign the holding player who might mitigate the problem.

It seems increasingly likely that history will judge William Carvalho’s most significant act in football was to remain unsigned by Arsenal.

It is an area likely to be particularly exposed on Sunday as Arsenal travel to Anfield. Last season they leaked seven goals over two league games against Liverpool. In both matches Roberto Firmino prospered by dropping deep into precisely that space; if Arsenal cannot deal with a threat into that zone coming from in front of them, they struggle even more when it comes from behind them.

If defenders follow Firmino that in turn creates space for wide men to cut into. Given the arrival of Mohamed Salah means Liverpool now have pace on both flanks, Sunday could be horribly messy for Arsenal as the same failing repeats once again.