Chelsea closing in on Oxlade-Chamberlain 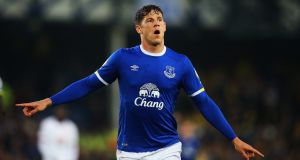 Chelsea are increasingly confident they will secure Alex Oxlade-Chamberlain from Arsenal before the closure of the transfer window and hope to speak to Everton over the potential purchase of Ross Barkley after Sunday’s meeting between the sides at Stamford Bridge.

The pair could yet be joined by another England international, Leicester City’s Danny Drinkwater, as the champions seek to satisfy Antonio Conte and bolster his senior options before Thursday night’s deadline.

Oxlade-Chamberlain, who has entered the final 12 months of his contract, has been offered new terms by Arsenal but is understood to have made clear his desire to depart for a fresh challenge after six years at the club.

Arsenal are not prepared to lose all of Oxlade-Chamberlain, Mesut Özil and Alexis Sánchez under freedom of contract next summer and, given the lack of suitors for the German and the hierarchy’s intransigence over the prospect of selling Sánchez this summer – Manchester City are likely to test that resolve before Thursday – the England midfielder appears the likeliest to leave.

Liverpool have also been interested but, while no bid has yet been received, Chelsea feel an offer worth around €37.8 million will be accepted and the player will make the switch across London.

They will compete with Tottenham Hotspur for Barkley, who is in rehabilitation with a torn hamstring which will keep him out until the new year.

Chelsea’s interest has surfaced late but they are ready to trump any Spurs offer for the 23-year-old and hope to speak face to face to the Everton owner, Farhad Moshiri, or the chairman, Bill Kenwright, if they attend Sunday’s game.

There are bridges to be rebuilt with the visitors after the fallout from Chelsea’s interest in John Stones last summer and Romelu Lukaku this year. Those players ended up joining Manchester City and Manchester United respectively.

Drinkwater has yet to feature for Leicester this season with Chelsea’s opening bid, worth around €16 million, having been rejected. City value the 27-year-old at more than €32 million but the player has made clear he is keen to move to Stamford Bridge and a compromise is likely to be reached next week.

Conte would welcome the addition of the three Englishmen after a tense summer behind the scenes, with Chelsea’s attempts at squad strengthening laboured.

Tiémoué Bakayoko and Álvaro Morata joined for significant fees but, as it turned out, only as direct replacements for Nemanja Matic and the disaffected Diego Costa.

The Italian has also secured Antonio Rüdiger – who is set to start again against Everton in the continued absence of the suspended captain, Gary Cahill – but had spent the tail-end of the last campaign warning that playing in the Champions League would require significant additions to be made.

Eden Hazard, who starred in last season’s 5-0 thrashing of Everton at Stamford Bridge, will not be involved on Sunday as he continues his rehabilitation from ankle surgery.

The forward was picked to play against Everton’s Under-23s at Aldershot on Friday evening, with Conte admitting to being “surprised” Roberto Martínez had chosen to call up the player for Belgium’s games against Gibraltar and Greece. Hazard will not be ready to play in those qualifiers.