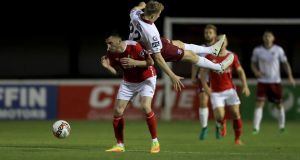 Non-league Bluebell United are into the quarter-finals of the FAI Cup after shocking First Division Cabinteely at Stradbrook on Friday night.

Cabo boss Pat Devlin had cautioned about Bluebell’s class in the build-up to the tie and they managed to hold on for victory after Shane Stritch fired them ahead on 20 minutes.

The attacker profited from a horrendous mix-up between Seán Fitzpatrick and his goalkeeper Mick Kelly to slot into an empty net.

Despite Kieran Marty Waters and Ryan Swan having chances to force extra-time, and Keith Fahey getting sent-off late on, Andy Noonan’s side survived Cabinteely’s comeback attempt.

Bluebell, who had recently beaten Cabo in a friendly, had to survive an early scare when Dean Casey’s shot rebounded off the crossbar and Swan couldn’t convert the loose ball.

Stritch then began to probe at the other end and was alert to punish the mistake and give Bluebell a crucial lead.

In response, Conor Keeley had an effort hacked off the line and Waters wasted a chance to level midway through the second half. With 13 minutes left, Swan had the ball in the net but it was ruled out for offside. Not even Fahey’s red card, for a late challenge on Waters, prevented Bluebell from following Crumlin United’s lead of taking a League of Ireland scalp in this year’s cup competition.

Eoin McCormack cracked home a superb goal in stoppage time to deservedly seal a place in the quarter-finals for Galway United.

It was no more than Shane Keegan’s men deserved after a hard-working performance which St Pat’s were just not able to match at Richmond Park.

Galway led 1-0 at the break after Jonah Ayunga broke the deadlock after 17 minutes when he connected to a superb cross from the left by Ronan Murray.

Ayunga, on loan from Brighton & Hove Albion, was stretchered off before the break after being injured in a challenge with Pat’s defender Michael Barker.

Galway goalkeeper Conor Winn was in superb form and he did well to deny Jordi Balk after 28 minutes, and then tipped a shot from JJ Lunney around his right post just before the break for Pat’s fifth corner of the opening half.

Pat’s skipper Ian Bermingham came close to an equaliser after 27 minutes when he connected to a corner from the left by Conan Byrne but his flick came back off the butt of the right post.

Pat’s forced four corners in the opening three minutes of the second half but couldn’t make any of them count.

They piled on the pressure after that but lacked penetration up front and Galway’s hard work throughout paid a big dividend.

They squandered a couple of late chances from McCormack and Melody but then sealed it with that superb goal in stoppage time.

Holders Cork City’s progression to the quarter-finals was serene as they proved far too strong for Athlone Town at Turner’s Cross.

Set on their way by Kieran Sadlier’s opening goal just inside the second minute, the Rebel Army were always in control and a 4-0 half-time lead did not flatter them in the least before the lead was extended in the second period.

Fielding nine of the starters from Monday’s league win over Finn Harps, City were into the groove immediately, with man of the match Sadlier heading home Karl Sheppard’s cross and Sheppard got the second in the 10th minute following Robbie Williams’s through ball.

On the half-hour, Connor Ellis made it three following Shane Griffin’s good run and pass and another goal arrived in injury time, Garry Buckley the beneficiary of a Sheppard cross on this occasion.

The chances continued to come in the second half. Athlone goalkeeper Igor Labuts did well to deny half-time sub Achille Campion but, after Labuts tipped over a Sadlier effort, Campion netted from Griffin’s corner.

It was 6-0 with 14 minutes remaining, Ellis with his second after Labuts had again saved from Campion, and the French striker rounded off the rout at the death.

Drogheda United booked their place in the quarter-finals for the first time since 2014 with a facile 5-1 win over Munster Senior League side Cobh Wanderers on Friday night.

The hosts dominated possession and the gulf in class began to show early on as Michael Devine’s goal was put under serious pressure.

It took the Boynesiders 29 minutes though to break the deadlock. John Meade bravely blocked an Adam Wixted shot conceding a corner. From that set piece the ball was cleared to Jack Bayly who pumped a cross to the far post where Shane Elworthy headed into an empty net.

The second came just before the break when Bayly hit a long-range shot which goalkeeper Michael Devine spilled and Elworthy was on hand to finish the loose ball.

Devine, who had made some excellent saves in the first half, was called into action immediately after the re-start as Stephen Dunne’s header forced a point blank save from the 44-year-old. But there was nothing the Cobh native could do minutes later when Elworthy crossed to the near post and Chris Mulhall brilliantly steered it home.

Cobh then pulled on back from the tip-off as they went direct and Michael O’Shea slipped David Stack through and he rolled the ball under Stephen McGuinness.

With 90 minutes played Mulhall saved the best for last as Thomas Byrne teed up the striker and he lobbed Devine from just inside the box. Byrne then got his own name on the score sheet in injury time as he powered a loose ball to the bottom corner to seal the rout.

Don Cowan was sprung from the bench to power Longford Town into the quarter-finals but non-league Bangor made them sweat for their passage at the Iveagh Grounds.

Despite a corner count of eight to nil, Longford struggled to really trouble the Bangor goal in the first half.

Town defender Daniel O’Reilly did crash a header off the Bangor crossbar from Jake Kelly’s corner nine minutes in as the Leinster Senior League side survived an early scare.

Davy O’Sullivan then headed wide from a Kelly cross when he should have hit the target before Tristan Noack-Hofmann and Sam Verdon had further chances as Town remained on top.

Verdon did have the ball in the Bangor net on 40 minutes, but it was ruled out for offside.

Bangor had far more about them from the restart with Ronan Byrne’s goal bound shot deflected for a corner.

But it was home goalkeeper Stephen Conlon who was forced into the first major save of the game on 66 minutes, getting down to save Alan Kehoe’s low drive after the winger got in behind on the right.

Substitute Cowan then broke the deadlock on 71 minutes. Having burst past several defenders down the right, the winger drilled his shot past Conlon.

But Longford then had to hold on as Bangor pressed hard to get back into it.

Jack Brady rescued his side with a brilliant save with his feet to deprive Graham Zambra’s close-range drive on 81 minutes.

Noack-Hofmann did equally as well to block Zambra’s goal bound shot minutes later as the First Division side held out.