With tougher clashes against Netherlands and Norway ahead, a win in Senec is crucial 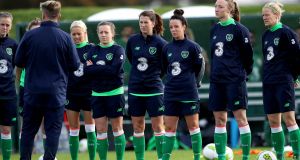 Republic of Ireland Women’s squad during training ahead of their World Cup qualifier against Slovakia. Photograph: Ryan Byrne/Inpho

After opening their World Cup qualifying campaign with a convincing win over their Northern neighbours last month, the Republic of Ireland would settle for a narrow one today as they can expect a tougher test from Slovakia in Senec (4.30pm, Irish time).

European champions Netherlands, whom they travel to on November 28th, and Norway are also in Ireland’s group for the 2019 finals, meaning there can be no margin for error against nations ranked lower than them like the Slovaks.

The teams last met in April for a friendly overshadowed by the Ireland squad’s pay dispute with the FAI and their goalscorer in that 1-0 victory at Tallaght Stadium, Stephanie Roche, is unavailable today due to injury, along with Ainé O’Gorman.

Slovakia’s only previous game in the campaign ended in a 6-1 thumping by the Norwegians last month, perhaps illustrating the two-speed nature of the group and the need for Colin Bell’s side to emerge from the chasing tranche to challenge the pair of superpowers.

“People outside of Ireland are dismissive of our quality but there is a belief in the squad that we can reach a first-ever major tournament,” says Marie Hourihan, the Manchester City goalkeeper who took over the position following the retirement of stalwart Emma Byrne in August.

Bell’s predecessors Noel King and Sue Ronan had both unsuccessfully tried enlisting the former England Under-23 international into the fold before the ex-Frankfurt coach made his pitch.

“Some players mightn’t like it but Colin always gives you the truth,” she says. “He was straight on to me about declaring after his appointment in February and said age didn’t matter to him.

“I wasn’t expecting Emma to retire just before the campaign started, and her boots are big to fill, but I’ve enjoyed the challenge so far.”