Antonio Conte tells Mourinho to ‘start looking at himself, not others’

‘Mourinho likes to concentrate on what is happening at Chelsea. Also last season’ 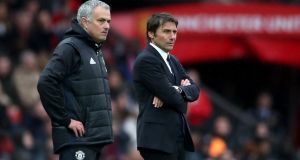 Antonio Conte has reacted angrily to José Mourinho’s observation that “other managers cry and cry and cry” about injuries to their players, a criticism perceived to be aimed at the Chelsea manager, and suggested his opposite number at Manchester United should concentrate on his own team.

Conte has publicly bemoaned the effect a cluttered schedule has had on his squad over recent weeks and has lost N’Golo Kanté and Victor Moses to hamstring complaints, and Danny Drinkwater to a calf problem. David Luiz, Gary Cahill and Tiémoué Bakayoko all ended the Roma draw carrying new knocks, too, with Conte admitting his team are now in “an emergency situation”.

Mourinho suggested rival managers were more eager to point out their injury lists in the aftermath of United’s 1-0 win in Benfica and, when those observations were relayed to Conte, the Italian made clear his frustration. “But do you think it was for me?” he asked. “If he is speaking about me, I think he has to think about his team and start looking at himself, not others. I think that, a lot of times, Mourinho [likes to concentrate on] what is happening at Chelsea. A lot of times, also last season. [He has]to think about his team.”

Chelsea take on United at Stamford Bridge on November 5th with their relationship having already been tested by a post-match incident in the same fixture last season, when Mourinho suggested Conte’s celebrations on the touchline had been disrespectful to the former Chelsea manager.

David Luiz was substituted before the hour mark against Roma because of a calf injury which could make him doubtful for Saturday’s clash with Watford, when Chelsea will be seeking to avoid three straight Premier League losses after defeats to Manchester City and Crystal Palace.

Bakayoko, meanwhile, played on despite a groin problem, while Conte played down concerns over the captain Gary Cahill after the defender finished the game with a heavily bandaged head, saying it was “nothing serious”.

Chelsea had surrendered a two-goal lead, earned through strikes from David Luiz and Eden Hazard, to trail 3-2 with 20 minutes remaining. Conte, who used the defender David Luiz in midfield, admitted his tactics contributed to Chelsea being second best. When David Luiz went off for Pedro, Chelsea reverted to their usual 3-4-3 formation.

“I didn’t like the type of football we did for a lot of the game, but it’s right to take the responsibility for this,” Conte said. “I tried on one hand to protect my team, to become more solid and to move our central defender into midfield. On the other hand we lost totally our style of football.

“Sometimes you have to find the right solution to try to protect your team. Sometimes it’s good, sometimes it’s bad. But you know very well our situation.

“It was good to draw. Roma deserved this result. I have to praise my players, because my players showed me a big effort, a big commitment tonight. Otherwise we lose the game.”