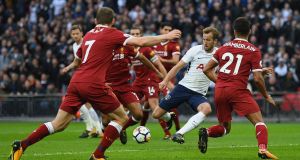 At times in this intriguing test of Premier League aspirations, it was hard to work out which was the more remarkable thing - Tottenham’s vivacious, springing attacks or Liverpool’s dozy, fluffy underbelly. Both aspects were in sharp focus as Mauricio Pochettino’s team marauded through what passed for the defensive efforts of the visitors. Diego Maradona was in attendance - interviewed as part of the half-time entertainment thanks to his trusty translator Ossie Ardiles - and even at the portly age of 56 the old master might have fancied a goal or two himself.

As it was, the Tottenham crowd made merry thanks to a couple from their marksman of the moment Harry Kane, plus strikes from Hueng-Min Son and Dele Alli. It enabled Spurs to end a sequence of 10 games without managing to beat Liverpool, and in fine style.

Both teams came into this contest bouyed by their European excursions this week and hoping to use that as a springboard to build domestic possibilities. Tottenham’s positive energy flowed. Liverpool have shown that they possess something similar on a good day. But this was a horrible one, where the main difference between the two sides was influential. Tottenham’s solid structure and sense of team organisation is something Liverpool sorely lacked.

After their mission well accomplished at the Bernabéu, Tottenham returned with their point and reset to their more familiar and expansive structure, intent to test out Liverpool’s main area of vulnerability. With Liverpool’s back line struck by a state of severe confusion, this was a wise and rewarding plan.

Needless to say it was the man of the moment who wasted no time to etch his attacking class all over another game. Kane scored with a jewel of a strike and provided another for Son in a scorching opening 12 minutes. The subplot that linked the two goals took the form of Dejan Lovren, who looked utterly discombobulated as Tottenham’s slick play passed him by. It was like one of those mysterious illnesses you hear about when someone wakes up from a bang on the head speaking fluent Etruscan. After half an hour playing with a disorientated defender, Jürgen Klopp withdrew Lovren but by then the damage was done.

In only the fourth minute Kieran Trippier’s dinked pass completely bamboozled Lovren, inviting Kane to do what he does best. As soon as he received the ball his instinctive hunger to score took over. Despite losing his balance as he swayed past Simon Mignolet, he readjusted brilliantly to steer a low left-footed volley into the corner of the net.

Tottenham doubled their lead when Hugo Lloris hoiked a throw up the pitch, Lovren misjudged the flight of the ball, and Kane was away, hurtling up the flank before brilliantly teeing up Son to whack in the second.

Attacking in electric waves, the sharp, inventive and determined runs offered by Kane and Son were a continuous danger to Klopp’s team. Son sprinted forwards to smash another superb shot against the crossbar. Kane smacked the ball into Lovren’s legs. There were easy pickings in the air.

Liverpool’s only form of defence had to be attack, and they regained the sense they were in a game when cutting the deficit in the 24th minute. Jordan Henderson scooped a pass forwards and Mohamed Salah was too quick for Tottenham’s retreating rearguard. The Egyptian’s cute little scuff deceived Lloris and crept in at the far post.

Tottenham’s cushion was re-established in first-half stoppage time. Joël Matip strained to divert Christian Eriksen’s lofted free kick and Alli pounced to pick his spot. Tottenham were alert and hungry for goals, but Liverpool knew they made it far too easy.

It was hard to establish how Klopp might engineer a turnaround, and whatever the half-time plan was, it didn’t do much to change the course of the game. Kane plundered another early in the second half. Mignolet could only punch a set-piece delivery to Jan Vertonghen, who tried to get a slice of the goal action. Although Roberto Firmino managed a goalline clearance, Kane just picked up the pieces and finished with unerring ruthlessness.

Such was the mood of swelling optimism around the bulk of this 80,000-plus Wembley crowd, one of the best received moments of the game came when Lloris sprang to exhibit his shot-stopping prowess with a stunning reflex save. He repelled one of those dizzyingly whipped shots from Philippe Coutinho to great acclaim.