Martin O’Neill delighted to face Denmark away in first playoff

Northern Ireland drawn against Switzerland with first leg in Belfast 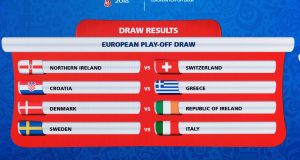 The results of the Fifa football World Cup 2018 European play-off draw is displayed on the big screen in Zurich. Photograph: Getty Images 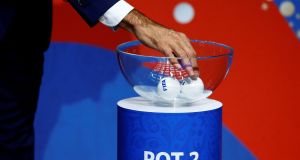 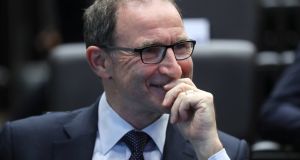 Martin O’Neill says Ireland’s meeting with Denmark in next month’s World Cup playoffs will be “an interesting confrontation”, with the games providing the opportunity for the 65-year-old to lock managerial horns with his former team-mate Age Hareide.

“Naturally we were pleased to be in the draw,” said O’Neill after former Spain and Real Madrid captain Fernando Hierro had plucked the Republic of Ireland and Denmark out in Zurich. “We had to win our last couple of matches to get here and being one of the unseeded teams, it was always going to be a difficult tie for us.

“So I’m delighted to be in it; I know Denmark and I know the manager, Age Hareide, he and I used to play together [at both Manchester City and Norwich City in the early 1980s] so it will be an interesting confrontation.

The FAI later confirmed that the away leg would be played in Copenhagen on Saturday November 11th, with the home leg back at the Aviva Stadium on Tuesday November 14th.

Though getting past Denmark will clearly be a major challenge, Ireland do still appear, on the face of it, to have been handed the kindest draw possible with their opponents the lowest ranked of the four seeded sides.

O’Neill, while acknowledging that he was happy with the order of the games, did look to play the significance of it all down.

“I’m delighted, I suppose, to be drawn away from home first,” said the manager, who admitted to having felt some relief that his side had avoided the Italians, “and so we’ll try and get some sort of advantage or certainly negate Denmark’s advantages before we get to Dublin.

“I think if you asked most managers they would probably say they prefer to play the second game at home but then with the way the rules are, with extra time and away goals, it gives the away team that chance to score not just in 90 but potentially in 120 minutes and so I think that one advantage sort of negates the other.

“I’m hoping that obviously that could have a big bearing on proceedings but we have to be going to Dublin with something still to play for and you don’t want to be out of the competition before that game takes place.”

The manner of the playoff success two years ago would, he suggested, serve as a pretty good example as to what his players might aim for this time.

“I think we can draw from that experience,” he said. “We had two games against Bosnia – very, very difficult matches for us. The game [in Zenica] shrouded in fog in the second half of that particular game, we got that elusive away goal which is very, very important and we were actually able to carry that important momentum into Dublin for the second game, which we won. Because it’s not that long ago I think we can draw something from that.

“Obviously it would be a terrific achievement if we could make it [again this time], he added, “but we’ve got a long way to go.”

Northern Ireland manager, Michael O’Neill, whose side were drawn at home to Switzerland first, said that the order of the games might have some impact on how his side approaches the first leg but, he insisted, the team would take confidence from their recent home record.

“We have only lost one game there in four years – to Germany – so, we intend to make it a very difficult night for Switzerland as I am sure they will for us here.

“The most important thing is that you don’t concede an away goal in that situation but, equally, it gives us an opportunity; the importance of an away goal in the second leg is sometimes more valuable,” he said.

“We will be prepared for the game. Switzerland have had a great qualifying campaign. Nine victories, one defeat. But, as I say, it gives us an opportunity to go to Russia. We look forward to the games. We know we will have to be at our best to qualify but we believe that we are capable of doing that.”

In the other two fixtures, Italy will take on Sweden while Croatia will face Greece.

1 Welcome to Iten in Kenya – home of champions and cheats
2 Saracens to accept second 35-point deduction and effective relegation
3 How do Klopp’s Liverpool measure up against greats of past?
4 Sonia O’Sullivan: How did Melbourne become the world’s most polluted city?
5 James Ryan returns to the Leinster fold for Benetton clash
Real news has value SUBSCRIBE
Crossword Get access to over 6,000 interactive crosswords