Manager, who is nearing halfway point of contract, says that in football, the ‘future is tomorrow’ 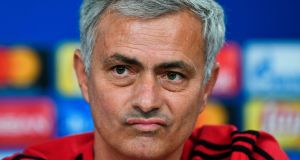 José Mourinho has refused to commit his long-term future to Manchester United, with the manager stating that in football, the “future is tomorrow”.

The Portuguese is nearing the halfway point of a three-year contract signed in 2016, yet despite this meaning he enters its final year next summer, Mourinho is not currently prepared to commit to staying on any further.

The Guardian understands Mourinho will extend his tenure at Old Trafford if he is offered a sizeable pay rise but publicly the 55-year-old pointed to the terms he agreed to when becoming manager. “The answer is exactly that – nothing is happening, I’m at Manchester United, I have a contract and that’s it,” he said as he prepared for the team’s Champions League group match at Benfica on Wednesday.

Asked if he would like to sign on beyond summer 2019, Mourinho replied: “I don’t think there is an answer for that, I’m not in conditions to answer to that because there is nothing to answer, I have a contract and that’s it. I have my contract that ends in May/June 2019, we are in October 2017, so I don’t know what to say.”

Mourinho praised Paris Saint-Germain at the weekend and stated that he did not see himself finishing his career at United. He moved to clarify these comments here. “The only thing that I told and is true and there was not misinterpretation of my words is I am not going to end my career at Manchester United,” he said.

“I ask how is it possible in modern football that a manager is going to last 15 or 20 years, I think Wenger is the last one. It is impossible for us to last for so long. If in this moment I want to finish my career in four or five years my ambition would be to end my career at Manchester United.

“I think I’m going to be 15 years minimum in the job [as a manager] and I think it’s impossible to stay 17 years in the same club even if you want, even if you try. I think Arsène Wenger will be the last one to do that, that was my answer [at weekend] – I don’t think I’m going to end my career at Manchester United. After that people try to be clever, malicious. I didn’t think about signing a new contract, but I don’t think about leaving too.”

Regarding the claim by Liverpool’s Dejan Lovren, who said Romelu Lukaku deliberately kicked him during United’s 0-0 draw at Anfield on Saturday, Mourinho said: “You know I read something [about this] but it’s quite, there is a bit contradiction there,” he said. “Because he says: ‘Let’s move on and forget what happened,’ but then he spends 10 minutes about what he thinks happened and didn’t happen.

“So for me these are words without any meaning and FA committee [which have taken no action] is there to analyse and make decisions, so no comment.”

United face Benfica top of Group A having taken maximum points from their opening two fixtures while Rui Vitória’s side have lost twice, to CSKA Moscow and Basel. Yet Mourinho, who left the injured Eric Bailly back in Manchester, remains wary of the Portuguese champions.

“Nobody knows what’ll happen. Benfica could win 12 points and finish with the same possibilities as everyone else,” said the manager. “What I was trying to show yesterday was Benfica are much better than CSKA Moscow and Basel. I think the players were convinced in the meeting we had in the morning that results aren’t the real indicator of the value of a team.

“I think qualification is out of the question [if they lose] so I believe Benfica need to make a point without question. The strategy that Rui will choose, offence or defence, I don’t know. But I have studied Benfica the best I could. I’ve been getting to know them to make a thorough analysis of their play. Rui has done many different things in the Champions League.”

In addition to Bailly, Mourinho remains without Paul Pogba, Marouane Fellaini, Michael Carrick, and Zlatan Ibrahimovic. Luke Shaw and Marcos Rojo, returning from lengthy layoffs, travelled to Portugal’s capital and trained on Tuesday afternoon, though neither is expect to start.

Mourinho said of his plans for Wednesday evening: “I will not tell you the team. First because the players don’t know yet, and second, with so many injuries, I think that should be something that you can view with almost a guarantee of success, because our options are so few that it is easy for you to guess the XI.”

Ashley Young should be in the side, with the 32-year-old enjoying a renaissance at full-back. He said: “It’s one of those things as a professional player now that you have to be able to play in different positions and be versatile. I’ve found myself playing at full-back, enjoying it and playing well, wherever the manager wants me to play, I go out and give 100 per cent whenever I pull on the United shirt I look to do as well as I can.” Guardian service