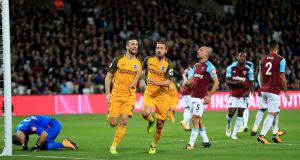 For Slaven Bilic, it was a form of torture. For Brighton & Hove Albion, however, the anger that started to rain down from the home sections as the final whistle approached was music to their ears. They have waited a long time to experience the feeling of winning away in the top flight again – 34 years to be precise – and how they cherished putting that statistic to bed at the London Stadium.

It was March 1983 when Brighton won 2-1 away to Swansea City in the old First Division. The scoreline was far more emphatic here. Brighton executed Chris Hughton’s plan to perfection, with two goals from Glenn Murray and a fine effort from José Izquierdo moving them into the top half, and the taunts from the away end spoke volumes for their dominance over West Ham, who could be back in the bottom three by the end of the weekend. Bilic will be a worried man after this capitulation.

A little over a month since West Ham seemed to be on the verge of civil war the mood has been more measured of late, to the extent that David Sullivan felt comfortable enough to put his continued support for Bilic down to a belief in morality during a interview with Sky Sports before kick-off. They were noble words from the club’s co-owner – “I believe in what’s right,” Sullivan explained – although anyone paying attention to recent events at West Ham might have taken them with a pinch of salt given that it only takes a few adverse results for the grumbling to resume in this corner of east London.

Chairmen are hardly known for worrying about shows of loyalty when they see their team slipping, after all, and it is doubtful Sullivan enjoyed the sloppiness that meant West Ham walked off to a chorus of boos at half-time.

It had seemed as though the onus was on West Ham to seize the initiative in the early stages. Instead it was Brighton who took control, surprising their hosts by pressing high and passing the ball with pleasing crispness and confidence. With Bruno willing to make overlapping runs in support of Anthony Knockaert on the right, Brighton’s adventurous spirit was troubling West Ham, who looked slightly put out by the impertinence of their opponents.

This boldness paid off. West Ham were trying to come to terms with Brighton’s positive approach when Pedro Obiang lazily conceded a free-kick on the left. Pascal Gross’s inswinging delivery carried danger and Obiang, epitomising West Ham’s doziness, failed to track Murray who guided a low header beyond Joe Hart for his first goal of the season.

This was the perfect scenario for Brighton, who were able to drop back, sit deep and stifle West Ham, while it was a stern test of character for Bilic’s players. Brighton were diligent and organised, snapping into the challenge whenever there was a hint of a loose touch and West Ham’s creators toiled in their search for space.

Weighed down by a lack of movement in attack West Ham’s threat was limited to hopeful snapshots from Javier Hernández and the frustration was building even before Izquierdo doubled Brighton’s lead just before half-time. Moments after Hart made a fine save to deny Murray at the end of a flowing counterattack Izquierdo gathered possession on the left, stepped past Obiang and aimed for the far corner from 20 yards. Hart’s inability to get a strong enough hand to the Colombian’s bending effort summed up West Ham’s performance.

The absence of the suspended Andy Carroll meant this was an opportunity for West Ham to show they could flourish without their Geordie battering ram. On paper their attack looked flexible, quick and inventive. Yet they were struggling to turn territorial dominance into clear openings. Manuel Lanzini was finding it hard to shake off Dale Stephens and Davy Pröpper while Hernández was often isolated against Lewis Dunk and Shane Duffy, a committed duo who were keeping Mathew Ryan well protected in the Brighton goal.

Bilic responded by tweaking his system at half-time, removing Cheikhou Kouyaté from midfield and adding André Ayew to his attack. It was a substitution with a whiff of desperation about it. As the clock ticked past the hour West Ham had still not forced Ryan to make a serious save. Their approach remained ponderous and reliant on high balls into the middle instead of intricate passing that might have pulled Brighton out of their careful shape.

It was a night when West Ham were left wondering when Marko Arnautovic, jeered off after being replaced by Edimilson Fernandes, is going to repay some of his £24m fee. Not that the Austrian’s departure led to an improvement. Moments later Pablo Zabaleta tripped Murray, who confirmed the inevitable by sending Hart the wrong way from 12 yards.