Shamrock Rovers: ‘We need to go with the mindset to win every game’ 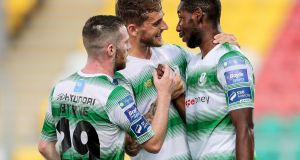 As they face into testing away games at Derry City on Friday night and Waterford on Monday, Jack Byrne wants Shamrock Rovers to bring a winning mindset into the remainder of the domestic season and chase leaders Dundalk all the way.

Second-placed Rovers are seven points behind the champions with a game more played as both clubs revert their full attention to league matters.

“I think it’s just about every game now,” said midfielder Byrne, who on Thursday was named SSE Airtricity/Soccer Writers’ Association of Ireland Player of the Month for July, his second such award of the season.

“Who knows where that will take us? They are obviously a good side, Dundalk. They got knocked out of Europe during the week and will be disappointed.

“I’m sure they’ll be focused on what they’ll need to do, the same way as we are going to be focused.

“We’re just trying to stay with them for as long as possible. Hopefully, come the end of the season we’ll be there or thereabouts.”

Defender Joey O’Brien has been playing the last few weeks with an ankle problem and is unlikely to be risked, while reserve goalkeeper Leon Pöhls is a doubt having suffered a knock in training.

Victories over Waterford and UCD have propelled Derry above Bohemians into third place on goal difference, as manager Declan Devine expects a much sterner test on Friday night.

“This is a really tough match for us,” said Devine, whose only selection issue regards winger Junior Ogedi-Uzokwe who has been troubled by a knock in recent weeks.

“Rovers have been building their team for a few years now, and you can see how that experience is proving invaluable for them.

“They were very good in their European games. They play on the front foot and have really good options going forward.

“Despite that, I believe there has been very little between us in our meetings so far this season. Both teams like to get the ball down and play so this has the makings of a decent game for the fans.

“This is a chance for us to gauge where we’re at right now as we aim to compete with the likes of Rovers and Dundalk on a regular basis.”

Dundalk host Finn Harps as they look to extend their unbeaten league run to 17 games.

Jordan Flores and Stephen Folan remain out for the champions with hip flexor and knee injuries respectively, while the match comes too soon for influential midfielder Robbie Benson as he recovers from a rib injury.

Three successive 1-0 wins in the league have pulled Harps six points clear of bottom side UCD.