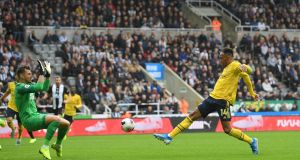 A little bit of a boycott and an awful lot of rain ensured that Steve Bruce’s Newcastle United reign began in downbeat mode as Pierre-Emerick Aubameyang emphasised his enduring importance to Arsenal by cutting through the gloom and registering an exquisitely incisive winner.

If it hardly bodes well for Bruce that Unai Emery’s supposedly vulnerable backline managed that real north Londoner’s collector’s item, a clean sheet on the road, at least the sight of the watching Andy Carroll keeping his ponytail dry by wearing a baseball cap emblazoned with the word “Icon” hinted at the prospect of potentially better days ahead.

Unfortunately for Newcastle, their newly returned, local hero is injured – yet again – and, despite tantalisingly brief cameos redolent with glittering promise, their overall lack of attacking ruthlessness appeared suggestive of a long, hard, slog ahead.

The inclement weather made Sunday a bit grim for both sides, contributing hugely to some mutually incoherent passages of early play.

Then Bruce’s team began finding a foothold in the game and started pressing Arsenal high up the pitch whenever possible.

Joelinton, Bruce’s marquee £40 million attacking signing from Hoffenheim, headed wide from a Matt Ritchie cross, Miguel Almiron was booked for diving as the crowd screamed for a penalty and Bernd Leno diverted Jonjo Shelvey’s swerving shot away for a corner.

Emery’s side did little of note but, despite a decided sluggishness, not to mention nervousness in possession, still contributed the more dangerous moments, little flashes of passing, movement and sharp acceleration hinting at much greater menace to come.

Yet if Arsenal had been unsettled by the security scare that kept Mesut Özil and Sead Kolasinac at home in north London, their hosts seemed to derive a measure of reassurance from the fairly secure looking 3-5-2 framework within which Bruce had configured them.

That structure proved sufficiently robust to keep the score goalless at half-time on a day when Mike Ashley, Newcastle’s owner, will have been fairly satisfied to note that a proposed boycott of the game by supporters variously dismayed by Rafael Benitez’s departure, Ashley’s stewardship of the club and Bruce’s appointment. Despite the noticeable empty seats more than 47,000 had still filed through the turnstiles while a pre kick-off protest march from Ashley’s Sports Direct in the nearby city centre to the ground attracted only around 300 dissenting fans.

They missed the sight of Leno making a smart one-handed save to prevent Joelinton scoring, the important Isaac Hayden interception that possibly prevented Henrikh Mkhitaryan from scoring and the decent Martin Dubravka block that denied Aubameyang.

Bruce will have been mightily relieved to see Mkhitaryan curl an extremely inviting opening wastefully off target after Arsenal had, for once, completely wrong-footed his defence but gratified by both his team’s strength down the left and the crowd’s overall generosity of spirit towards him.

Significantly Benitez’s successor was the recipient of warm applause as he, rather niftily, subdued a dropping stray ball with a heel as it flew into the technical area.

Mkhitaryan’s lack of similar assurance on a day when the often wayward Armenian struggled to settle into any sort of passing groove seemed to be playing into Bruce’s hands as Emery looked disgruntled with far more than the raindrops beating down on the tightly pulled hood of his Arsenal anorak.

True, young Joe Willock offered some bright attacking moments but visiting fans craved Nicolas Pepe’s liberation from the bench. In reality Emery’s new £72 million attacking acquisition from Lille requires a gentle induction following involvement in the African Cup of Nations and the same goes for the normally incisive Alexandre Lacazette who was also on the bench as he continues to recover from a pre-season injury.

The moment had arrived for Aubameyang to issue a reminder that his presence, alone, is often sufficient to undo teams by beginning his pursuit of another golden boot in the most convincing fashion.

It all began with Paul Dummett’s slapdash pass selling Jetro Willems – newly on for Shelvey – horribly short and enabling Ainsley Maitland-Niles to seize possession and sashay down the right before picking out Aubameyang with a luscious ball that removed Jamaal Lascelles from the equation.

What followed from Aumabeyang was an amalgam of adhesive control, technical excellence and exquisite ruthlessness all in the space of two touches. With his first, the Gabon striker tamed the dropping delivery and, with the second, he dispatched a cushioned half-volley beyond Dubravka, his boot meeting the ball as it bounced back up off the turf.

Pepe came on and, so, too, did Newcastle’s flamboyant new buy, Allan Saint-Maximin. The former Nice winger did well but not quite well enough to upstage Aubameyang and friends. – Guardian