Liverpool hardly break sweat to leave Canaries all a flutter 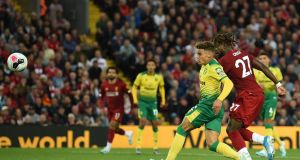 Jürgen Klopp congratulated Daniel Farke before kick-off on ending Norwich’s three-year absence from the Premier League. He then exposed his compatriot to the chasm that exists between the peak of the Championship and the summit of European football as Liverpool began their pursuit of a first league title for 30 years with a convincing victory.

Easier assignments await the Premier League newcomers, who adhered to the principles that won them promotion but merely invited pressure and the likes of Roberto Firmino to wreak havoc in the process.

Tougher tests await Liverpool too but their opening night was not without concern as goalkeeper Alisson was forced off in the first half with a worrying knee injury. On the surface Klopp looked more upset at the loss of a clean sheet than his invaluable goalkeeper, and Liverpool’s defending was not immediately back at its usual standard, but goals from Mohamed Salah, Virgil van Dijk, Divock Origi and an own goal from Grant Hanley ensured a smooth return to the new campaign.

The transfer window closed with Liverpool and Norwich nestled together at the foot of the Premier League spending table after their German managers prioritised faith in players who delivered silverware last season over fresh and expensive new recruits. Time will reveal the merits of that approach but having collected 97 points in the Premier League and 94 in the Championship last time out, Klopp and Farke had good cause to seek continuity and improvement from within.

Norwich started with eight of the players who began the last game of their Championship-winning campaign. Liverpool opened with nine of the team that started their Champions League triumph over Tottenham in Madrid. The new Premier League season kicked off to the strains of ‘Champions of Europe’ reverberating around Anfield and a mosaic of the European Cup, a Liver Bird and 6 covering the Kop. Liverpool were into their stride as quickly as their supporters.

Klopp’s concerns over a difficult pre-season– admittedly played without Alisson, Salah, Firmino and Sadio Mané for the most part – eased with the impressive second-half showing against Manchester City in last Sunday’s Community Shield.

The sharpness, energy and incisiveness that returned at Wembley was evident again as Liverpool began at an eye-catching pace. Norwich were confident in possession and more threatening than many Premier League visitors to Anfield last season. But they gifted Klopp’s team an early lead and were on the receiving end of a punishing introduction to the quality at the upper echelons of the top tier long before the half-time whistle brought some respite.

Liverpool’s first goal of the new campaign came courtesy of an inadvertent slice off Hanley’s right foot. The move started where a Liverpool goal so often does, at full back, with Andy Robertson releasing Origi into space down the left. The striker who sealed the Champions League victory in May crossed low into the six-yard box where the Norwich captain attempted to clear but succeeded only in steering into the bottom corner. Hanley was in despair at his error. Norwich’s torture was only just beginning.

Joe Gomez, selected ahead of Joel Matip as Van Dijk’s central defensive partner, instigated the second with a polished pass out to Trent Alexander-Arnold on the right. Salah took over and found himself with only Tim Krul to beat thanks to a series of ricochets off Norwich defenders plus a measured touch from Firmino. Krul was duly beaten by a precise finish into the far corner.

Salah turned provider for the third. His corner was headed home by Van Dijk who only had to hold off Jamal Lewis and not even leap to beat the Norwich goalkeeper from close range.

It was four and a damage limitation exercise for the newly promoted team three minutes before the break. Alexander-Arnold delivered his first assist of the season with a floating cross in-between the static Norwich pairing of Hanley and right back Max Aarons. Origi, starting in place of Mané, who only returned to training on Wednesday following a post-African Nations Cup holiday, ghosted in to steer a glancing header beyond the over-worked and over-exposed Krul.

Norwich did have their chances to reduce the arrears with Teemu Pukki a lively and intelligent presence in attack. The striker, who scored 29 goals last season, twice teed up Marco Stiepermann on the edge of the Liverpool areas but the attacking midfielder miscued badly on both occasions. When he did find his range with a vicious half volley from 20 yards, Alisson was alert to make a fine save.

Alisson also foiled Pukki at close range as he continued where he left off last season and in Brazil’s successful Copa America campaign. Shortly before the interval, however, Liverpool’s number one collapsed while taking a goal kick and had to be helped down the tunnel following lengthy treatment. The Brazilian’s right knee gave way as he struck the ball and though Klopp was all smiles with Adrian as the new signing came on for an unexpected debut, he can ill-afford a serious injury to the influential keeper who was ever-present in the Premier League last season.

The start of the second half was delayed by several minutes due to a problem with an assistant referee’s headset. Liverpool were immediately on the front foot as soon as play restarted and Krul denied Jordan Henderson a fifth from Origi’s pull-back. Salah maintained the pressure with a delightful back-heel into Alexander-Arnold and his low cross was prodded wide by Firmino, although Origi was better placed to convert.

Pukki got the goal his performance deserved when he was released behind a slow Liverpool defence by Emiliano Buendia’s precision pass. The striker finished cleanly under Adrian to give the Norwich fans forced to make a ridiculous journey late on a Friday night something to celebrate. – Guardian