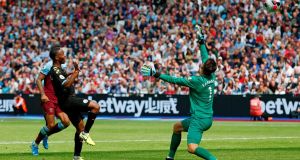 Raheem Sterling got Manchester City’s title defence off to a flying start with a hat-trick at West Ham as VAR made its mark in the Premier League for the first time.

Gabriel Jesus struck in the first half and Sergio Aguero came off the bench to score a penalty in a thumping 5-0 win for the champions.

However, City were denied another after a goal was disallowed by VAR for the first time in the Premier League, when Sterling was ruled offside by a matter of millimetres.

Then VAR ruled Aguero’s spot-kick, initially saved by Lukasz Fabianski, should be retaken as the goalkeeper had stepped off his line. The Argentinian did not make the same mistake twice.

West Ham actually played some slick football for the opening 25 minutes, but still found themselves on the end of another hiding — in five visits to the London Stadium, City have scored 22 and conceded once.

The opening goal arrived when Kyle Walker burst down the right and crossed to the near post, where Jesus was lurking between defenders to guide the ball home.

The goal sucked the life out of West Ham’s bright start, and their only shot on target in the first half was a weak effort straight at Ederson from #45million record buy Sebastien Haller.

Jesus was almost gifted a second before half-time when Issa Diop sliced his clearance but the striker could not lift the ball over Fabianski.

Hammers boss Manuel Pellegrini, facing the side he led to the title in 2014, threw on #25m new boy Pablo Fornals at the break.

But within six minutes of the restart City doubled their lead, with Kevin De Bruyne sauntering through an inviting gap in West Ham’s defence and laying the ball off for Sterling to finish.

City thought they had scored the third when Sterling crossed for Jesus to tap home, but a lengthy VAR intervention eventually saw the goal ruled out by the thickness of Sterling’s shirt.

West Ham were momentarily heartened and Diop could have pulled one back but he headed a Robert Snodgrass free-kick over, before Javier Hernandez was denied at point-blank range by Ederson.

But Sterling did grab the third when he collected a chip over the top from Riyad Mahrez and lobbed the stranded Fabianski.

Aguero got his season up and running with his late penalty, at the second attempt, before Sterling raced through to complete his treble as last term’s treble winners began the new campaign in style.