Darren Randolph: Robbie Keane could make a difference at Boro 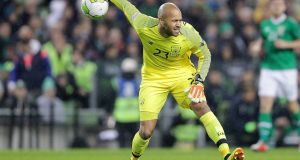 After Middlesbrough’s underwhelming summer of transfer activity, Ireland goalkeeper Darren Randolph is hopeful that the acquisition of his compatriot Robbie Keane to the coaching staff makes a difference to their Championship campaign.

The stopper has been used to promotion tilts since joining Boro two years ago, finishing fifth and seventh respectively, but the ending of parachute payments and financial fair play restrictions has introduced a new reality on Teeside this season.

Accompanying £5 million recruit Randolph to the Riverside in 2017 as part of a transfer splurge was Britt Assombalonga for a record fee of £15 million.

Even the appointment of the hometown boy for his first managerial job underlined the back-to-basics approach of owner Steve Gibson.

If they’re to navigate a way back to the Premier League this season, it will be along the lines of Norwich City’s feat of managing it with one of the more modest budgets in a division now deemed the sixth richest across Europe.

Enter Keane. Like Woodgate, he’s a newcomer to club management, a 39-year-old fresh from his playing days, yet one whose influence as assistant manager has already been felt within the working environment at Boro.

Randolph isn’t taking their opening haul of just one point from two games as indicative of a struggling season ahead.

Rather, he’s enthused by the toughest task he’s faced since dropping down a tier from his time at West Ham United.

“We missed a penalty when leading 2-1 at Luton Town on the opening day and ended up with a point,” explained the Bray native.

“Brentford beat us 1-0 on Saturday but we had two goals disallowed which should have been given.

“Granted that the club are not the financial powerhouses that we were in my first two years at the club, promotion is still the aim. We’re going to be relying on youth for it to work.

“I wouldn’t call it a dodgy start. It’s a totally new brand or style of football compared to last season and the management team are trying to drum that into the lads.”

And that’s spearheaded by Keane, whose preference for a purist approach isn’t necessarily synonymous with the fare on show in the Championship.

“Robbie wants us to play football at all times,” added Randolph. “There aren’t many teams still playing long-ball in the division.

“Sometimes, of course, you have to clear your lines, but having someone like Robbie in there, with his footballing brain and experience, is vital.

“I missed the two weeks of pre-season training, but the lads were texting me saying that Robbie was the best player on the pitch some days.

“He may not be as quick as he used to be but still has the touch and movement. That’s what he’s trying to pass on to some of our lads.”

Soon Randolph and Keane will be travelling back to Dublin ahead of Ireland’s Euro 2020 qualifier against Switzerland on September 5th.

The last four of the goalkeeper’s 38 caps have been in all of Mick McCarthy’s games at the helm, a series which has propelled them to the summit of their group at the midway point. A top-two finish would seal a second successive Euro qualification for the 32-year-old.

A byproduct of Switzerland’s recent success was their involvement in the latter stages of the Uefa Nations League in June, leaving the top seeds in the group with matches to catch up on in this latest competition.

“We’ve achieved our target of 10 points from the first four matches and knew the second half of the campaign, playing Switzerland twice, Denmark and Georgia away, would be tough,” said Randolph.

“I don’t see it’s a case of needing to beat Switzerland in Dublin. A point is better than nothing and those points can be priceless come the end of the group. It’s about taking points off the teams that can catch us and hope the other nations take points off them.

“It will be difficult but there is no reason why we can’t get the results we need and hang onto where we are or at least qualify.”

Darren Randolph was speaking at the of launch of his Irish Goalkeeper Academy in Abbotstown, which was attended by over 500 young aspiring goalkeepers.