Top of the pops: The highest transfer fees of the window so far 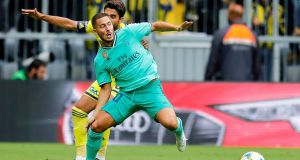 Premier League clubs have again been busy in the summer transfer window, which comes to a close at 5pm on Thursday.

The Belgium playmaker became the second-most expensive player in football history as he moved on after seven seasons, 85 goals and 52 assists in the Premier League.

The England international set a world-record fee for a defender as Ole Gunnar Solksjaer seeks to shore up United’s back line.

The exciting winger adds to a stable of attacking options which already includes strikers Pierre-Emerick Aubameyang and Alexandre Lacazette.

Tottenham’s first signing in three transfer windows will be counted on to add steel and quality to a midfield which appeared under-manned at times last season.

Mooted as a long-term replacement for 34-year-old club stalwart Fernandinho, the Spaniard made an assured debut in the Community Shield.

The striker’s existing loan was converted into a permanent deal to end his unsuccessful spell at Stamford Bridge.

United added another rising English star to their defence as the full-back moved on after a sensational breakthrough season at Palace.

The Frenchman, formerly of Auxerre and Utrecht, trailed only Bayern Munich star Robert Lewandowski for combined goals and assists in last season’s Bundesliga.

Like the Hammers, Newcastle also spent big on a Bundesliga frontman. The Brazilian, who scored 11 goals in all competitions last term, will have to fill the void left by Ayoze Perez and Salomon Rondon.

The Blues may be under a transfer embargo but they were still able to convert Kovacic’s loan into a permanent deal. They will also welcome January signing Christian Pulisic after his loan back to Borussia Dortmund.