Eagles holding out for £100m for talented Ivory Coast forward 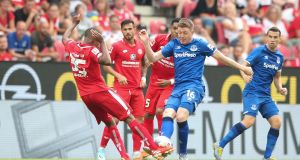 Crystal Palace have rejected Everton’s new offer for Wilfried Zaha and insisted that they will not accept less than £100 million (€108.25 million) for the Ivory Coast forward.

Marco Silva’s side have emerged as the only serious suitors for Zaha since Arsenal’s bid for the 26-year-old was rejected earlier in the summer, with Everton having already seen a £52 million (€56.25 million) bid rejected by Palace at the end of July.

But having signed Moise Kean from Juventus, Silva is understood to be keen to add more attacking options to his squad and on Tuesday Everton submitted a new offer of £70 million (€75. 8 million) plus Ireland international James McCarthy that would have also seen Turkey striker Cenk Tosun join on a season-long loan.

That was immediately rejected by Palace, who are reluctant to sell with little more than 24 hours of the Premier League’s transfer window remaining and concerns about how they could replace such a crucial player before the start of the new season.

It is understood that Zaha has been left furious by the decision, with the player disappointed that the south London club are blocking the transfer despite having agreed last summer to accept any “reasonable offers” they received. He began pre-season training last week having played for Ivory Coast at the African Nations Cup in Egypt and had been expected to be in contention to start Saturday’s opening game of the season – against Everton at Selhurst Park.

Zaha is not expecting to submit a transfer request at this stage and remains hopeful that a European club could still come in for him before the summer window closes on Thursday. Napoli and Borussia Dortmund have been linked with him in the past but both appear unlikely to be willing to fund such an expensive transfer.

McCarthy is expected to join Palace after arriving in London on Tuesday evening for his medical having agreed terms on a £3 million (€3.25 million) move, while Roy Hodgson’s side are also set to sign Victor Camarasa on a season-long loan from Real Betis. The Spaniard spent last season on loan at Cardiff and Palace will have the option of making his move permanent at the end of the season for £15 million (€16.25 million). They are also interested in signing Chelsea’s Reece James on loan, although the highly-rated 19-year-old could now be staying at Stamford Bridge to act as Cesar Azpilicueta’s understudy. – Guardian