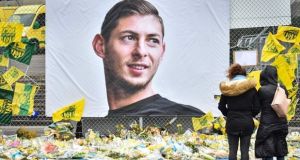 People look at tributes in front of a portrait of Emiliano Sala at the Beaujoire stadium in Nantes in February. Photograph: Loïc Venance/AFP/Getty Images

The footballer Emiliano Sala and pilot David Ibbotson were probably poisoned by carbon monoxide fumes in their small plane that crashed in the Channel in January, investigators have found.

Toxicology tests on the Cardiff City footballer showed levels of carboxyhaemoglobin – formed in the blood when exposed to carbon monoxide – above the point generally considered to be potentially fatal.

Inspectors at the Air Accident Investigations Board (AAIB) said that as the cockpit of the Piper Malibu light aircraft was not separated from the cabin it was likely that the pilot would also have been affected.

The symptoms of poisoning by carbon monoxide range from impaired judgment and drowsiness to confusion, blurred vision and loss of coordination, with seizures, unconsciousness and heart attacks likely at the level of exposure recorded in Sala’s blood.

The colourless, odourless gas is produced in high concentrations in piston engine planes, but should be extracted by the exhaust system. Leaks into the heating and ventilation system could bring the gas into the plane cabin.

Although investigators have not published conclusions, the special bulletin issued by the AAIB could explain why the plane carrying Sala fell thousands of feet in seconds after making a 180-degree turn. The pilot had requested a descent minutes earlier after encountering bad weather on the journey from Nantes to Cardiff on January 21st. Previous reports said unconfirmed radar readings showed the plane may have also climbed rapidly before its final descent.

Questions remain around the legal status of the flight and the pilot’s licence to carry Sala.

The body of the 28-year-old Argentinian was recovered in February but that of Ibbotson, 59, has not been found. The wreckage of the fuselage was found on the seabed off Guernsey in the Channel Islands.

The AAIB said it was continuing to investigate operational, technical, organisational and human factors which may have contributed to the accident.

Daniel Machover, of Hickman and Rose solicitors, who represent the Sala family, said: “That dangerously high levels of carbon monoxide have been found in Emiliano’s body raises many questions for the family.

“How he died will be determined at the inquest in due course.

“The family believe that a detailed technical examination of the plane is necessary.

“The family and the public need to know how the carbon monoxide was able to enter the cabin. Future air safety rests on knowing as much as possible on this issue.

“Emiliano’s family call on the AAIB to salvage the wreckage of the plane without further delay.” – Guardian