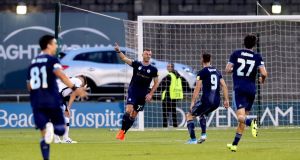 Irish involvement in Europe came to a sobering end on Tuesday as Dundalk were sent tumbling out of the Europa League by a clinical Slovan Bratislava in Tallaght.

Over 3,000 Dundalk fans made the trek to Dublin 24 hoping for a repeat of that famous night in 2016 when the Lilywhites overturned a first-leg deficit to beat BATE Borisov and progress to the group stages of the competition.

This, however, was more akin to the defeats that followed against AZ Alkmaar and Zenit St Petersburg where Dundalk’s positive attacking play was undone by the most basic of defensive errors.

The Slovakian kingpins arrived with a one-goal lead to protect and Rafael Ratao’s 12th-minute opener – a fine header after Dundalk were exposed on the right-channel – left Vinny Perth’s men in need of three goals to advance.

If that was a tall order, miracles were needed when Aleksandar Cavric pounced on a mistake by Andy Boyle 12 minutes before the interval to hook the ball over Gary Rogers.

Dundalk controlled the second-half and Michael Duffy pulled one back with 19 minutes to play but they were left frustrated by the performance of Slovan goalkeeper Dominik Greif.

Greif’s most notable save came in the 74th minute when he kept Patrick Hoban’s penalty out and substitute Erik Daniel sealed the deal for Slovan in stoppage time to set up a playoff showdown with Greek side PAOK.

Perth kept faith with the side that started in Slovakia six days earlier with Jamie McGrath given the nod ahead of Patrick McEleney. A rib injury meant that Robbie Benson sat things out and how Dundalk missed his influence in the middle of the park.

Slovan made just one alteration to the team that beat Dundalk at the Tehelné pole. An upset stomach meant that left-winger Moha didn’t make the trip to Ireland. He was replaced by Cavric, whose shot came back off the post for David Holman’s winner in the first leg. What an impact the Serbian had on the tie.

With the atmosphere cranking into gear before kick-off, Dundalk started in a positive manner with Jamie McGrath testing Greif low down to his right but that early promise was almost blown asunder shortly after.

A lack of communication between Rogers and Daniel Cleary saw the pair collide with Holman picking up the pieces. It looked like the Hungarian would roll the ball into an empty net but Boyle popped up to block the effort on his line.

The tie tilted firmly in Slovan’s favour seven minutes later. Faced down by Cleary on the right, Andraz Sporar was afforded way too much time to deliver a cross, picking out the incoming Ratao who guided a brilliant header across Rogers and into the far corner.

Jan Kozak’s side knew that another goal would put things beyond Dundalk’s reach and Holman dragged one just wide of the post. Dundalk steadied the ship after that and enjoyed a good spell that yielded a number of chances. Sean Murray’s corner from the right was headed down by Boyle at the far post but Hoban’s effort was brilliantly charged down by Slovan skipper Vasil Bozhikov.

Chris Shields then saw a deflected effort beaten away by Greif and Murray bent one just around the post but just when it looked like Dundalk were beginning to build some momentum, they were rocked back on their heels three minutes later.

Nothing looked on when Bozhikov punted the ball forward from the left-back position but after letting the ball bounce twice, Boyle’s header back to Rogers dropped short and Cavric profited to lift the ball over Rogers and leave Dundalk on the ropes.

John Mountney almost replied straight away but his low free-kick was safely gathered by Greif and Slovan should have gone into the break four ahead on aggregate but Holman couldn’t keep his effort on target after a sensational cross by Jurij Medvedev.

Perth introduced Patrick McEleney and Sean Hoare at the interval and Dundalk pushed hard to find a way back into it with Greif saving an awkward Hoban header before flying to his left to push Hoare’s curling effort around the post.

The hosts finally pulled one back with 19 minutes left to play when Duffy arrowed a low drive into the bottom left-hand corner of the net after good play on the left by Dane Massey.

That gave them a glimmer of hope but they passed up the chance to make it a grandstand finish just two minutes later when Hoban saw a penalty saved by the legs of Greif after Duffy’s drive was handled by substitute Mitch Apau and Slovan rubbed salt in the wounds late on when Daniel added a third.

1 Welcome to Iten in Kenya – home of champions and cheats
2 Saracens to accept second 35-point deduction and effective relegation
3 St Michael’s conveyor belt showing no signs of slowing down
4 How do Klopp’s Liverpool measure up against greats of past?
5 Ulster look to secure quarter-final place with win against Bath
Real news has value SUBSCRIBE
Crossword Get access to over 6,000 interactive crosswords