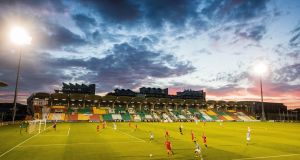 The debate over whether a derby played behind closed doors is merely a pale imitation of the real thing may go on for another while but Shamrock Rovers’ second in a week certainly suggested that there is something that little bit different about playing your near neighbours, partisan crowds or not.

As they had been on Sunday in Richmond Park, Stephen Bradley’s side was dominant for stretches but once again all they could muster was a draw. Even that could have been in real jeopardy through the closing stages, though, when the loss of Rory Gaffney to injury and their inability to replace him because they had used up their slots for substitutions, forced them to play the last 10 minutes with just 10 men.

The dropped points in this second of three Dublin derbies to be played in quick succession mean that Bohemians would move to within two points of top spot if they could beat st Patrick’s Athletic on Saturday afternoon and, more enticingly, would be looking to leapfrog their local rivals when they come to Tallaght in a couple of weeks time.

Early on here it had all seemed to be shaping up to be a very different story. Rovers produced a succession of chances to go with their first-half possession but the closest they actually came to scoring through the opening half was while things were still settling and Jack Byrne’s corner from the left was almost turned into his own goal by Dan Byrne.

Shelbourne survived that, then chances for Roberto Lopes and Aaron McEneff and the home side scarcely forced a save out of Colin McCabe bar the time Graham Burke latched on to an angled cross and the goalkeeper had only really to stand his ground.

Through that extended spell, Rovers seemed capable of playing through their opponents more or less at will and though their finishing wasn’t great, a breakthrough still felt like it was more or less a matter of time. Having been limited to the occasional break through most of the opening period, though, Shelbourne exerted some real pressure of their own as the game approached the break and when Alan Mannus fumbled a Georgie Poynton cross, a more ruthless finish by Dan Rooney would have his side in front.

It wasn’t the last time that Rovers were left scrambling about at the back and they struggled to regain their early superiority after returning for the second half. As might have been expected, the home side produced some neat passing and clever movement to create space around the Shelbourne area but they routinely left a bit too much of it behind them.

When it came to relieving the pressure, Plan A for Ian Morris’s side was clearly route one and Ciarán Kilduff had his work cut out when he was the only target for his team-mates to aim at. On the occasions that the visitors got additional bodies into their opponents’ half, however, they could certainly pose a threat and Jaze Kabia might well have scored with a rasping shot from the edge of the area after Kilduff had teed him up nicely.

Late on, McCabe made his mark with a one-footed stop to deny Aaron Greene and his defence worked hard to the final whistle in order to frustrate a side that never gave up on grabbing a winner, even after going a man down. They couldn’t find a way to get it, though, and with Dundalk preoccupied, perhaps, with problems of another type, Bohemians have the chance now to play their way into what would be quite the title race.