Hansi Flick: The man who rescued Bayern as a European force

Not much was expected but he has exceeded expectations 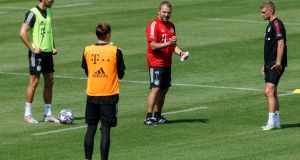 The day before the biggest game of his life, Per Mertesacker was called into a room at Germany’s peaceful, beachside training facility a couple of hours outside the Brazilian town of Porto Seguro and was told he would not be playing.

Joachim Löw, the national team manager, coolly explained that he was going to make some changes for Germany’s quarter-final match against France. Although Mertesacker was among the most experienced members of his squad, and although he had played every minute of the 2014 World Cup, he was going to be one of them. Jérôme Boateng would shift into the centre, with Philipp Lahm restored to his role at right back.

At that point, Mertesacker – considered and amiable and understanding, as intelligent a player as Löw could have hoped to have in his squad – admits that his “ego came out a little bit.” “I was in shock. ‘I was thinking: I thought these guys trusted me.’ I was asking, ‘What about this? What about that.’ ”

Flick was 54 when he returned to Bayern, and he had not managed a team in 14 years

That was the point at which Löw stopped talking, turned to his assistant and allowed Hansi Flick to take over. Flick always knew just what to say. From the outside, the impact Flick has had since taking charge at Bayern Munich in November after the firing of Niko Kovac verges on the miraculous; certainly, the 8-2 destruction of Barcelona on Friday night that represents their (current) zenith seemed to come with a touch of the divine.

Under Kovac, Bayern were listing. A fin de siècle air had settled on the club. The squad simmered with unrest, and its executives fretted over whether the time had come to ease waning stars, iconic figures like Manuel Neuer and Thomas Müller, out of the team.

Flick was, as they saw it, a placeholder. He had played for the club in the 1980s – as an “aggressive, tough and fair” midfielder, according to his former teammate, Olaf Thon – and so he understood the “culture” of Bayern, as the team’s forthcoming chief executive, Oliver Kahn, put it.

Since his retirement, he had built an impressive coaching CV and a quietly lofty reputation, particularly over his eight years as an assistant to Löw with Germany. Indeed, Bayern had appointed him in the summer of 2019 in part because the club felt he might be able to step in if it needed to dismiss Kovac.

But it was not designed to be a long-term solution. Flick was 54 when he returned to Bayern, and he had not managed a team in 14 years. Even then, his experience was in Germany’s lower tiers: He had left Hoffenheim in 2005 after failing to win promotion to the second division.

When Flick was appointed as Löw’s assistant, Mertesacker admitted, there was some scepticism among the players. “Hesitancy, I’d say,” he said. “Of course he was a player, but you wait to see what he can bring.” To Bayern, who shared some of the same reservations, Flick was there to keep the seat warm, not to occupy it.

Within weeks, though, it was obvious that Bayern did not need to worry about Mauricio Pochettino’s wage demands or whether Julian Nagelsmann could be coaxed away from RB Leipzig. Flick would end the season with a revitalised team, a win record that dwarfs that even of Pep Guardiola – 33 games played, 30 won, plus a Bundesliga title and a German Cup.

Flick took over when it seemed Bayern were finished as a force in Europe. On Friday, they produced what is certainly the most jaw-dropping result of the season, and a performance so devastating that it may have brought Barcelona to the end of an era. The transformation, between then and now, between that team and this, is remarkable.

You don’t praise the first team. You praise the guys who didn’t play, the ones who worked hard all week and create the environment

Although those who know Flick well – those who, like Thon, played alongside him and those who, like Mertesacker, worked under him – do not seem quite as surprised as they might be. As far as they are concerned, there is no great mystery here, no secret spell, no revolutionary tactical twist he has unearthed.

Instead, they say Flick’s great strength is what made Löw turn to him in that room in Brazil and ask him to help Mertesacker understand his decision. “He is very humble. He has a very human sense, a real social competence,” Mertesacker said. “He has a genuine interest in you as a person. He is not afraid to show his own vulnerability. And that is contagious.”

That day in 2014, as Mertesacker wrestled with his disappointment, Flick reassured him, assuaged his doubts, told him that things might change again for the semi-final. He emphasised that what was most important was what was good for the team. “He is a fantastic communicator,” Mertesacker said.

That is the same experience Arne Friedrich – a member of Germany’s squads at the 2008 European Championships and the 2010 World Cup – remembers. “He is very open, very honest, even when it comes to critical opinions,” said Friedrich, now the sporting director at Hertha Berlin. “He takes time with players. It is not just ‘work, work, work.’ He is very authentic. And that is the most important strength a coach can have.”

Kahn – a board member at Bayern – puts it more succinctly. “He always knows just what he has to say to players, especially in difficult moments,” he said. “He knows how to handle players.” That may be the most critical skill any coach at a club like Bayern can have. Bayern’s squad is filled with high-profile, high-earning stars. Although the club’s reputation as “FC Hollywood,” a place never more than a day or two from some sort of public fallout or simmering mutiny, has waned, a substantial portion of a Bayern coach’s job is still managing the fragile politics of the dressing room.

It is a role in which Flick excels. Mertesacker credits him not only with establishing lines of communication between the players, the coaching staff and the rest of the backroom staff – “so everybody who needed the information had the information” – but with helping to foster the team spirit that carried Germany to its World Cup victory in 2014.

“He was the one, I think, who told Jogi Löw always to praise the substitutes,” he said. “You don’t praise the first team. You praise the guys who didn’t play, the ones who worked hard all week and create the environment.” Friedrich sees a similarity in Flick’s approach to that of Jupp Heynckes, the only coach in Bayern’s history to win a league, cup and European treble. “Looking from afar, Heynckes had that ability to build a good team chemistry,” he said. “You never used to hear about one player on the bench complaining. It seems to me that Hansi is similar.”

Partly, that may be down to the relationships Flick has with many of his players. “He knows Neuer and Müller from the national team,” Kahn said. Others, like Joshua Kimmich and Serge Gnabry, are familiar from his time as the German Football Association’s technical director. He had a head start on building bridges.

That is not to say that Flick has not changed anything about Bayern’s style. Kovac’s approach was reactive: He spent training sessions drilling his squad of highly talented individuals in their defensive duties, creating a climate of frustration.

Flick’s emphasis, instead, is on what they can do with the ball, encouraging players to think more about how to use their talents. If anything, it has improved Bayern’s work-rate – only Liverpool presses more in Europe’s top five leagues – and it has served to restore the sheen to players like Müller.

There is a genuine belief in Munich that Lisbon may yet provide the high-water mark. For such an enthusiastic talker, Flick’s career has been a quiet one. He has spent much of it away from the limelight, an associate and an assistant. Mertesacker, for one, never got the impression he was especially interested in being “the main man.”

Now, though, he is two games from the brightest glare soccer can offer, two games from the sort of achievement that brooks no debate. Thon, certainly, is in no doubt that his time has come. “Bayern has the quality,” he said. “They will win the Champions League, in public, and he will be seen as a great coach.” – New York Times