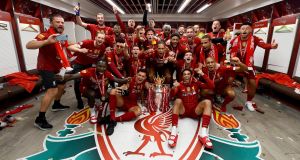 Liverpool will begin the defence of their title with a home game against newly promoted Leeds United, after the fixtures for the 2020-21 Premier League season were confirmed.

Following a season that lasted nearly a full calendar year, there is to be no let-up for the top flight as clubs face an unprecedentedly compact competition in the coming year. The new campaign begin on September 12th with Manchester City and Manchester United starting a week later than their rivals after their participation in the Uefa finals competition. They will visit Wolves and host Crystal Palace respectively, on September 19th.

Champions League qualifiers Chelsea start away at Brighton while Arsenal travel to Scott Parker’s Fulham, winners of the Championship play-off final. Another eye-catching match in the first round of fixtures will see Sheffield United host Wolves on the night of Monday September 21st.

Due to the pressure on scheduling, which will see the season completed in a month’s less time than normal, the Premier League has also announced that there will be two additional rounds of midweek fixtures, with all games screened live on TV as during the restart.

In total, broadcasters will show 220 live matches next season, up from 200. Of the additional live matches, 12 will be shown on Sky Sports, six on BT Sport and two on Amazon Prime Video.

The extra midweek matches will be played across the weeks commencing January 11th and 18th, and the second will take place in the week commencing May 10th.

The Premier League said: “The truncated 2020-21 season has created a number of scheduling complications, and the Premier League has accommodated the agreed minimum 30-day break for all clubs involved in the latter stages of the 2019-20 Uefa club competitions. Therefore, Manchester City’s opening fixture against Aston Villa at home and Manchester United’s first game, away to Burnley, have been postponed.”