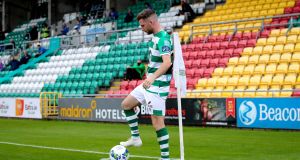 Shamrock Rovers’ Jack Byrne scored the opener as his team increased their lead at the top of the table on Saturday. Photograph: Inpho

A 3-1 win gave them a sixth straight victory and moves Stephen Bradley’s side five points clear at the top of the Premier Division table.

Rovers were ahead from the seventh minute courtesy of Republic of Ireland midfielder Jack Byrne, with international team manager Stephen Kenny watching in Tallaght. He curled a sublimely struck free kick to the top corner of the net for his fourth goal of the season.

Dylan Watts increased Rovers’ lead nine minutes later with a composed finish after Byrne had poached possession and thread him in on goal.

Byrne then provided a second assist for another fellow midfielder Aaron McEneff, his cracking strike from distance extended Rovers’ advantage further on 36 minutes.

Three minutes later, Karl O’Sullivan availed of some lax home defending from a long throw-in to shoot past Rovers’ goalkeeper Alan Mannus at the back post. However it only proved to be a consolation goal for the visitors.

Earlier in the day, John Martin struck the only goal of the game to give former Ireland international John Sheridan a winning start to his managerial reign at Waterford.

A deserved third victory of the campaign moves Waterford up to fourth place in the table.

Waterford got their reward for a positive start, clinically punishing a disjointed Shelbourne on the counterattack on 15 minutes, for what proved the only goal of the game.

Kurtis Byrne, one of three new signings in the Waterford side, broke forward to pick out the run of Tyreke Wilson on the left. The fullback’s looping, deep cross was nodded back across goal by Tunmise Sobowale and Matt Smith stretched to get a slight touch to put off Shelbourne goalkeeper Colin McCabe, allowing midfielder Martin to tap in from close range.