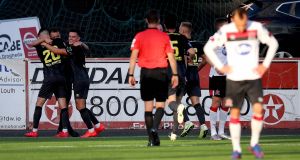 There is more than enough to dislike about “the new normal” without the sense of loss that pervaded the pre-match build up here. In an eerily quiet Oriel Park the talk beforehand was of Harry Taaffe whose sudden and tragic passing last weekend has clearly left a hole at the heart of Dundalk football club that will take some time to fill. The t-shirts the home side’s players warmed up in also bore his image.

The strange circumstances may not have helped either side settle into the actual football but both looked a bit ring rusty and quite a few of the game’s better chances came from defensive errors rather than attacking play of real quality.

There were a couple of fairly lucky escapes at both ends and Daniel Clearly will count himself fortunate not to have been punished for either of the errors he committed while trying to pass his way out of defence but there was no let off for Luke McNally after 24 minutes when his failure to control a ball from Rory Feely allowed Stefan Colovic in and the Serb set up Pat Hoban for his sixth goal of the season.

The near silent celebration was barely over, though, when the visitors struck back thanks to a really fine first time finish from Robbie Benson, the speed of the strike depriving Dundalk of any chance to settle into their lead.

It could have been worse before the break with Dan Ward clipping the post with a follow-up effort after Jordan Gibson had a shot blocked down. Gary Rogers was still stranded off his line when David Titov got onto the rebound and tried to find the bottom right corner but Chris Shields was on hand this time to block then finally clear the danger.

It was less than entirely convincing stuff from the champions although their opponents deserved a fair bit of credit. Their latest arrivals, Titov and Gibson both showed plenty of promise on their debuts, Benson thrived against his former club and there was a penalty claim in each half for Stephen O’Donnell to get worked up about.

Not quite so new to the scene, Colovic was another player to catch the eye through the contest. He reacted quicker than Lee Desmond to bag the assist and repeatedly looked to play the sort of killer pass that will make him popular with the fans if he can pull them off.

When he did just that to put Michael Duffy into space six minutes from the end of the first half, a successful finish by the Derryman would have provided the league’s new streaming service with the sort of highlight that would be sure to shift a few subscriptions but the shot was ever so narrowly off target.

Greg Sloggett was presented with a far more convertible opportunity by Duffy whose free kick, well into the second half, allowed the midfielder a free header but when he too missed the target there was suddenly the sense that the champions were going to lose ground here to their challengers.

They pushed hard for a winner but never controlled the contest in the way they would have wanted against opponents who never seemed to stop believing that they might still score again themselves. Still, the hosts briefly looked as though they might grab one in the dying seconds when David McMillan threatened on the break only for the attack to run out of steam.

A Shamrock Rovers win over Finn Harps will now put the Dubliners five points clear at the top of the table and in such a severely curtailed season, that would leave little enough margin for further error when Dundalk visit Dalymount Park next week.

Vinny Perth’s side, though, will surely be better than this by then. St Pat’s look to have some improvement in them too but this was a very satisfactory restart to their season.