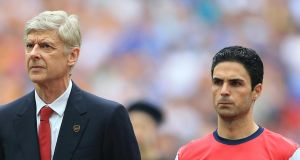 It was May 2015 and Arsenal’s prospects looked shinier than any point in the previous half-decade. They had qualified directly for the Champions League group stage, a feat that had evaded them for two seasons, and now they had a chance to retain the FA Cup against Aston Villa. There was a sense the punishing tides that battered Arsène Wenger’s later years were turning and, speaking three days before the final, one of the senior players nudged those above him to make the final push.

“It’s up to the manager and the board to decide what is the missing ingredient,” he said. “Were we missing that final bit of quality to win [the league] or deepness in the squad? It’s up to them to analyse that.”

The speaker was Mikel Arteta. Back then he was the club captain and had the authority to prod where others might hesitate. Five years on he has rather more direct influence upon Arsenal’s manoeuvres but may reflect, given his more recent pronouncements on the need to strengthen, that some things do not change. Their on-pitch fortunes have regressed and even the kind of £31.7 million (€35.2 million) fee that secured Alexis Sánchez’s services at the start of 2014-15 may be beyond them this summer, but once again Arsenal arrive at Wembley hoping talk of change, new brooms and fresh beginnings crystallises into tangible progress.

This time they must seize their chance to build. The harsh reality is that they are, essentially, aiming for any bounce to bring them somewhere near the spot from which they had hoped to evolve in 2015. Cup finals have offered the only genuine shafts of joy for Arsenal since 2006 and all three of their wins in the 2010s – the comeback against Hull, the evisceration of Villa, the knife-edge affair in which they pipped Chelsea – have brought memories that stand alone. But none are stitched into a narrative of gathering momentum; Arsenal missed their opportunities to build on each one and it is among the reasons an overview of the past 10 years presents itself as a litany of false dawns.

Sánchez arrived following the Hull final in 2014 and there was frustration that, had Arsenal not taken half a season to get going after what Per Mertesacker later described as a “post-World Cup trauma”, they might have approached the Villa showpiece with even more to show off about. But the more significant regret came in the way Arteta’s squad-building suggestion went unheeded. Petr Cech’s arrival six weeks later appeared to solve a long-term problem in goal but Arsenal needed more.

Wenger opted for caution, sensing a singular togetherness in his squad. No major outfield signings were made in the summer of 2015 and, while second place to Leicester looked good on paper the following season, the reality was they were 10 points off the pace and missed a glaring opportunity to make the final step they had expected. Quality and depth were, as Arteta had politely foretold, exactly the things Arsenal lacked and there was no real plan B when Santi Cazorla was laid low in November by the injury that effectively ended his campaign.

The hat-trick of squandered chances was completed after that victory over Chelsea in 2017 although recruitment was less of an issue. Alexandre Lacazette was a top-quality forward operating at his peak, Sead Kolasinac had, regardless of any sniggering at the back, a reputation for being made of the right stuff, and when Pierre-Emerick Aubameyang arrived the following winter there was more optimism a giant might be stirring. But they missed out on the Champions League for the second successive year; Wenger departed on a low and Arsenal were required to start all over again.

So Wembley brings no guarantees of a glittering future and Arteta knows the course of history must change. Chelsea may well be overcome again on Saturday but, particularly with no big day out for fans to savour, that will barely be relevant if next season brings no significant uptick in league form. How can Arsenal harness a moment of glory and turn it into one that hardens attitudes from top to bottom?

“At some stage you have to make a decision: whether I want to aim to make that gap closer and go for it, or I stay where I am,” Arteta said last month, making it clear enough he feels Arsenal are at a fork in the road. Anyone who saw the way he channelled modest resources to devise a game plan that deservedly beat Manchester City in the last four might suppose that, if the trick is repeated against Chelsea, the Kroenkes should allow him to mould the side in a way more palatable to his taste.

The danger will lie in seeing yet another FA Cup success as a job satisfactorily done. “I think we need to be demanding,” Arteta said. “I think we have the ability and what it takes to go ahead and set bigger targets.” It is another excerpt from the interview in 2015; the fact it still serves as a call to action in 2020 is a reminder that, for Arsenal, the time has come for Wembley to bring more than a joyful day out.