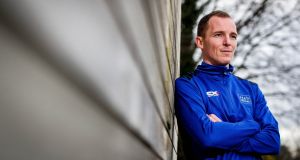 Former Bohemians captain Derek Pender will take charge of the sessions and manage the team at PFAI’s Out of Contract training camp. Photograph: Ryan Byrne/Inpho

Recently retired Bohemians captain Derek Pender will take his first step into management over the coming weeks as he oversees the annual training camp for out-of-contract Airtricity League players.

Now in its ninth year, the camp is an initiative of the Professional Footballers’ Association of Ireland (PFAI) to allow members of the union who have yet to sign with a club for next season to train and play a couple of games together in order to highlight their availability.

Around 20 players have linked up with the group this week in Abbotstown, where the FAI is helping with facilities and logistics. The union is also organising a second camp for players based in the west of Ireland which will be run by Sligo Rovers assistant manager and FAI development officer John Russell in Castlebar.

A team drawn from the participants will travel to England early next month for a game against League One side Rochdale (managed by Brian Barry-Murphy) scheduled for December 11th, with a second game back in Dublin against home Farm planned for the following week. It is also intended to run an exchange with the Finnish union, with a player heading in each direction for a week or so of training and a game.

Things have improved significantly for the union’s members since the first camp was run in 2011, with the majority of players enjoying better pay and many on longer contracts, but PFAI general secretary Stephen McGuinness insists the project is very much worthwhile.

“There are 105 players currently without clubs,” he says, “and what this does is allow them to maintain the schedule that they have become used to as professional players, of training regularly, in good surroundings, around other players.

“It offers different things to different players; for some of them it’s mainly about maintaining physical fitness, for others it’s about their mental wellbeing, but it is something that we always get a good reaction to, and more than 90 per cent of the players who participate end up getting clubs for the following season.”

Pender, who only called time on his own playing career a matter of weeks ago, will take charge of the sessions and manage the team, with Pat Flynn and Brendan Clarke also involved on the coaching side of things. Stephen Bradley and Trevor Croly are among the coaches to have taken on the role in previous years.