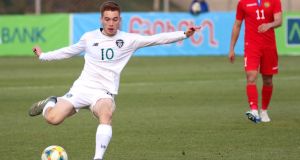 Connor Ronan in action in the Uefa European U-21 Championship qualifier group 1 match between the Republic of Ireland and Armenia on November 14th. Photograph: Hrach Khachatryan/Inpho

While three of the Under-21 team’s four goalscorers from Tuesday night will hope their performances in the 4-1 win might boost their chances of a breakthrough at their various club sides, the man whose arrival into the game at half-time did so much to turn the tide in Ireland’s favour looks be a living, breathing, kicking case for going further afield in search of first-team football.

Irish strikers Adam Idah and Troy Parrott’s opportunities have amounted to a League Cup appearance apiece so far this season, while Lee O’Connor has yet to make any impact on the Celtic first team. Zachary Elbouzedi, who got Ireland’s fourth, is a free agent since leaving Waterford and has been widely linked with Dundalk.

Connor Ronan, meanwhile, is all but certain to be lining out in the Slovakian top flight for Dunajská Streda again this weekend having firmly established himself as a starter there since joining on loan from Wolves back in February.

The 21-year-old was outstanding through the latter half of Ireland’s 4-1 win, an uncontainable flurry of energetic running and passing who tormented the Swedish defence from the space just behind Idah, who hailed his Rochdale-born team-mate’s ability as “exceptional” afterwards.

Ronan, who looked to have a really great understanding with both the Norwich City striker and Parrott (for whom the news that José Mourinho has succeeded Mauricio Pochettino at Spurs may not have been entirely welcome), admits that the fact that Under-21s manager Stephen Kenny is already lined up to take over with the senior team has added a certain something to the dynamic within the squad. Everyone is well aware of just how much it might mean to make an impression on the Dubliner.

“Once you got into the first squad, it was about staying in his eye, and staying in the squad for as long a possible and getting into the team and trying to impress him. And as you’ve seen with Troy and Lee and obviously Aaron [Connolly] as well, they’ve got their chances. The lads are confident Stephen will give lads chances if their form is good enough and that’s a massive boost for us. It’s always in the back of your mind that if you are playing well, there’s a chance of a call-up.”

It is not entirely clear where Ronan is in Mick McCarthy’s thinking, or if he features much at all, but Kenny makes no bones about how much he admires his style of play.

“Connor is a very dynamic and intelligent player,” he says, “Very selfless. High-speed running and his STATSports [a GPS-based performance monitoring system] statistics are just off the chart. He puts in a huge shift . . . always.

“He plays simple passes well. We have Daniel Mandroiu and Daniel plays sort of eye-of-the-needle passes which, when they come off, can be brilliant, but Connor is a different sort of number 10: he gets on the ball more frequently and knits the play quite well. The passes that he plays are actually quite simple passes, but he makes them look simple because he carries the ball, moves his feet, dribbles quickly, scampering, and he gets the weight and timing of passes right for runners, which is a skill in itself that shouldn’t be underestimated.”

I think Sweden are a good team. They battered Iceland and were 3-0 up against Luxembourg at half-time

That all said, Kenny left Ronan on the bench through the defeat in Iceland and had taken him off in each of his three appearances over the course of this campaign, and so the player admits feeling that he had a point to prove here.

“That was in the back of my mind coming on all right, although the main thing was obviously that at the time we were losing and I wanted to do as much as I could to try and affect the game and help the lads win.”

The victory maintains Ireland’s three-point advantage over Italy at the top of the table, who have two games in hand, and deals a fairly major blow to Sweden’s hopes of even stealing into second place for a likely playoff. Kenny believes top spot may now come down to the last game of the campaign (one he will almost certainly not be in charge for).

“I think Sweden are a good team,” says the manager, whose next two games are against Iceland at home, then Luxembourg away in March. “They battered Iceland and were 3-0 up against Luxembourg at half-time, so for us to go 10 points ahead of them. [They have] three matches in hand, but one of those matches is against Italy, so it is a strong position for us to be in. And I think we will go to Italy to win the group in the last game.”

1 Gordon D'Arcy: Ireland must go after victory by frightening France into mistakes
2 Henshaw the only change as Andy Farrell names Ireland team for Paris
3 Champions Cup draw: Irish provinces learn their opponents for this season
4 Cian Healy: ‘Realistically I got away with murder when I was younger’
5 Giovagnoli’s appointment at Dundalk ‘a great story’ says Arsenal boss Arteta
Real news has value SUBSCRIBE
Crossword Get access to over 6,000 interactive crosswords