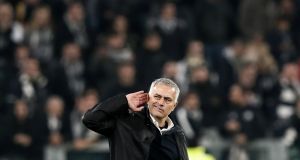 José Mourinho needs Spurs because of his sense of unfinished business in the Premier League. He wants to show that he can still inspire good players to new heights. Photograph: Isabella Bonotto/AFP

José Mourinho’s Manchester United team looked broken. The date was September 29th, 2018 and their shortcomings were written large on the open spaces of West Ham’s London Stadium. The 3-1 defeat was a nail in his coffin and no one left east London that day thinking he had too much longer as the United manager.

Mourinho would limp on for 2½ months – fighting, arguing, remorselessly testing patience – and, when the end came, it was not just his bridges at Old Trafford that were burned. It was extremely difficult to see that another leading Premier League club would call for him again.

At that point, the notion of the 56-year-old returning to the London Stadium on Saturday as the manager of Daniel Levy’s Tottenham would have been laughable – and not only because of Mauricio Pochettino’s excellent work at the club.

What an odd couple Mourinho and Levy could make. Mourinho is all about attacking the transfer market with massive money and constantly pushing for more and more in this area. He does not trust academy players. He wants instant fixes in the form of top internationals. That is how he builds quickly towards success. That, at least, is the stereotypical view.

Levy, by contrast, keeps the Spurs chequebook under armed guard. The club’s chairman is famously driven to eke every last penny out of a deal and, of the many stories on this, the one about his £20 million (€23.3 million) signing of Luka Modric from Dinamo Zagreb in 2008 stands out. The Zagreb director Zdravko Mamic had asked whether he could have five Modric shirts, which Levy was happy to accommodate. When the invoice for the transfer was returned, Levy had deducted the value of the shirts.

The Tottenham chairman never allowed Pochettino to spend too much in net terms, as he juggled the finances of Spurs’ new stadium, so how on earth could Mourinho deal with him? The demanding Portuguese would surely be too difficult. Clashes would be inevitable.

Yet here we are, with Mourinho installed as Pochettino’s replacement, after a whirlwind 12 hours or so beginning on Tuesday evening when the latter’s sacking was announced. But scratch beneath the surface and it becomes easier to see why Levy has reached out to Mourinho; why he can even see a kindred spirit in him. In many regards, the two men are remarkably similar, certainly in terms of their ruthlessness, pragmatism and single-minded pursuit of the obsessions that fire them.

Levy’s closeness with Pochettino was well-documented, the result of their shared journey to Spurs becoming regular Champions League participants. He did not want to sack Pochettino and he said as much in his statement. But sack him he did, because he recognised that the team’s Premier League form had flatlined and they would most likely finish outside the top four without immediate action. The decision could not wait. Levy could not risk muddling through until next summer. The new stadium needs Champions League football. So he put his personal feelings to the side.

What of Mourinho, who enjoys a friendship with Pochettino? Plainly, he had started negotiations with Levy before Pochettino was sacked – he has had his eyes on the Tottenham job for a little while – but, to him, this is merely business. It recalled the manner and timings of how he succeeded Louis van Gaal at United in 2016, a man he had worked with at Barcelona and described as a “big, big friend”.

Levy has a reputation for showing little or no emotion, particularly during negotiations. He is inscrutable and driven only by making money and adding value to Spurs. His pragmatism is ingrained. If he cannot get a deal done, he will park it and move on. He will not try to find a way around the system.

Mourinho, meanwhile, shows his pragmatism on the field. He is not interested in winning people over, merely winning, and it does not matter to him how that happens. If it is 1-0 and ugly, so be it. If, over the course of a campaign, he has to park the bus for 0-0s, so be it. There is no doubt that Levy will relish having such a serious employee, who does not mess about, not least because he wants to win as well. In Levy’s near 19-year stewardship, Spurs have won only one League Cup.

Levy had three key criteria for the profile of the new manager, with one being that he speaks fluent English, which Mourinho does. The others were that he had the gravitas to command the respect of the dressing room, particularly the star man, Harry Kane, and that he needed Spurs as much as Spurs needed him.

The Portuguese head coach’s star quality is not in dispute and he will find a group of players eager to tap into his trophy-winning mentality to earn some long-awaited honours. It is here that Levy has also taken a typically calculated risk. With a number of highly valued players running down their contracts and showing no signs of wanting to renew, might Mourinho be able to change that? Levy has paid out £12.5 million (€14.5 million) to dismiss Pochettino but that figure would be recouped many times over if, for example, Christian Eriksen were to re-sign.

Mourinho needs Spurs because of his sense of unfinished business in the Premier League. He wants to show that he can still inspire good players to new heights and, maybe, that it is not impossible for a chairman to work with him. The dynamics with Levy will be fascinating.

1 Gerry Thornley: Talk of Anglo-French hegemony is over the top
2 What next for green jersey hero Sam Bennett after the toughest of Tours?
3 The Offload: Saracens prove Pro14 is not fit for purpose
4 Tour de Covid tells us to cheer, clap and don’t ask questions
5 Chris Wilder confused by John Egan’s red card at Villa Park
Real news has value SUBSCRIBE