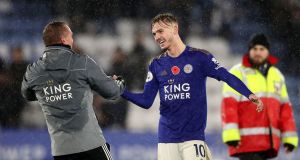 Gareth Southgate was probably right to play down the significance of last weekend’s Liverpool v Manchester City showdown from an England point of view.

Only three members of his present squad played at Anfield and featured in the starting line-up against Montenegro, even if one more came on as a substitute, and, as the England manager pointed out, there might have been double that number in times gone by.

Yet despite most predictions, the Premier League is not turning out to be quite the two-horse race originally envisaged. Leicester City and Chelsea stand between the leaders and the defending champions, and by way of proving this is no accident, those two clubs have just supplied six members of the England squad.

Whichever way you look at it there is quality at Stamford Bridge and the King Power, and based on the start both teams have made it is not too early to suggest both could still be occupying Champions League positions at the end of the season.

Brendan Rodgers sensibly dodged title talk after moving into second with their win over Arsenal, for until Liverpool begin to show signs of weakness the rest of the division can only dream of overtaking the leaders, though Leicester and Chelsea have already achieved the seemingly impossible by nudging ahead of City and the onus is now on Pep Guardiola and his players to do the catching up.

Chelsea are City’s next opponents at the Etihad, so the chance will come quite early. Few would have imagined Guardiola would have much trouble with a side coached by a rookie manager and subject to a transfer ban when Chelsea began their season with a 4-0 drubbing at Old Trafford. Yet quite a lot has changed in the short time since.

It turns out Chelsea have more than enough talented young players at their disposal to survive without going to the market, particularly as the influential Christian Pulisic was already on the books as a handy replacement for Eden Hazard, and it also looks as if handing the reins to Frank Lampard was not such a gamble after all.

Lampard was lucky to take over an already successful squad from the undervalued Maurizio Sarri – not many Premier League berths become available with Champions League football already secured – and has so far proved the safe yet still adventurous pair of hands the club needed.

Much more of this and Chelsea could find themselves keeping hold of a manager for more than a single season or two, confounding those who believed Lampard was simply a cheap and convenient appointment necessary to keep the seat warm until the transfer ban expires.

At Leicester Rodgers has possibly done even better. Certainly there were plenty of Arsenal-watchers shaking their heads last week and wondering why the Gunners could not have brought in the Celtic manager instead of going abroad for Unai Emery.

It is fair to say the latter is struggling. If Arsenal felt he was the nearest thing to a younger Arsène Wenger they have somehow managed to import all the difficulties associated with the older Arsène Wenger, whereas Rodgers was simply waiting under the radar in Scotland for the right opportunity to arise.

Given that top-four clubs not subject to transfer bans do not generally appoint home-grown managers, Leicester was probably the best destination Rodgers could hope for, whatever his disaffected public in Glasgow thought of the move.

Leicester finished in the top half of the table last season, are well run and resourced and, unlike clubs of broadly similar stature such as Everton or West Ham, have a league title win in recent memory.

Practically, only Jamie Vardy and Kasper Schmeichel survive from that side, though that is not the point. Both are still excellent players and encapsulate the confidence that runs through the squad, the certain knowledge that anything is possible.

Rodgers signs off his programme notes with a similar sentiment each week, because in Leicester everyone knows it to be true, and with James Maddison, Youri Tielemans, Ben Chilwell and other players brought through since 2016 a return to the Champions League could well be within reach.

That an eight-point gap exists not only at the top of the table but between fourth place and fifth suggests the present top four may already be breaking away. The identity of the team in fifth place – Sheffield United – also tells its own story.

The reality for Arsenal, Tottenham, Manchester United and anyone else with Champions League pretensions, however optimistic, is that a newly promoted side is doing a better job of hanging on to the leaders.

If that remains true after next weekend, when Manchester United are the visitors at Bramall Lane, Chris Wilder will be in line for a coaching award and some of his more lauded managerial counterparts will be in trouble.