All in the Game: representing Wales is a walk in the park for Bale 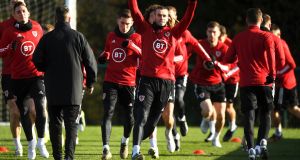 Until we read the Guardian’s eternally fabulous The Knowledge last week we were completely unaware of the uproar caused by PA announcer Colin Grout at English Northern Premier League club Whitby Town during their FA trophy game against Worksop Town.

In fairness to Colin, he turned up on talkSPORT the next day to apologise to anyone in the 443 crowd who he had upset, recalling their reaction when he made his unfortunate announcement. “It was more of a silence and a cold shudder went through my shoulders at what was happening,” he said.

What had he done? He only went and announced over the tannoy who had won the Great British Bake Off, the finale of which was on the telly that night and, evidently, had been set to record by a sizeable chunk of that 443 crowd.

“I didn’t realise that there were so many supporters of Bake Off in the ground, but obviously there was,” he said. “I’ve apologised and I’ve spoken to the chairman about having a couple of security people on the gates as I walk in next time,” he chuckled. People have lost their jobs for less.

Flag of the week

As spotted at Wales’ game in Azerbaijan, a salute to Gareth Bale’s priorities, as alleged by former Real Madrid player Pedja Mijatovic recently.

“The first thing he thinks about is Wales, then golf and after that, Real Madrid,” he wrote in his AS column, somewhat suggesting that Bale was less than committed to the Madrid cause.

The Welsh faithful are, of course, perfectly happy with the order of those priorities, hence the flag and the accompanying song.

And they would, no doubt, have been chuffed with Bale’s comments last week. “I definitely have more excitement playing for Wales. It’s like playing with your mates down the park on a Sunday,” he said.

You’d wonder, though, how his Welsh team-mates felt about likened to Sunday park players.

Kieran Trippier is having a happy time of it at Atlético Madrid since he moved there from Tottenham during the summer, forming a good relationship with his new team-mates who, of course, have come up with a nickname for the fella.

Is it Trips? Trippie? Trippo? KT? No. Diego Costa has ordained that he be called, well, Rooney.

“It’s just because I’m the only English player here and Rooney’s the only one he’s heard of – it could have been anything,” he told the Guardian’s Sid Lowe, Costa clearly having forgotten every English colleague he ever had during his three years with Chelsea.

“Everywhere I go, they shout Rooney. When I warm up, everyone’s shouting it. Everyone. I have Diego to thank for this. Of all the names.

Sacking of the week

Paolo Brogelli, president of Tuscany club Invictasauro, felt he had no choice but to dispense with the services of coach Massimiliano Riccini after he got wind of the 27-0 scoreline in a youth game. “We learned with amazement and regret the score I announce that our directors decided, unanimously, to sack Riccini.”

If you’re thinking that Riccini could hardly complain after his team lost 27-0, then it should be pointed out that his team actually won 27-0. And that was the problem.

“We were stunned to hear that our junior team had beaten Marina Calcio 27-0,” said Brogelli. “The values of youth team football are antithetical to such a thing. The opponent must always be respected and that did not happen today. As president, I sincerely apologise to Marina. Our coaches have the duty to train young players, but above all to educate them.”

“They lie in my bed and I sleep with them. I look at them every day. They are my girlfriends.” – And it’s only November and Red Bull Salzburg’s Erling Haaland has already amassed five girlfriends – ie the match balls he has received for scoring hat-tricks. It’ll be a tight squeeze in that bed come the end of the season

1911 -That’s when Finland played its first international, but they’d never once managed to qualify for a major tournament – until they beat Liechtenstein on Friday. If at first you don’t succeed . . .

“You look at his gear when he’s playing football, his shorts are absolutely full of grass stains and mud – he’s always on his backside, he needs to have studs in his shorts. He doesn’t know how to defend properly. He’s got to go.” – Arsenal old boy Paul Mariner expressing some doubts about Shkodran Mustafi’s defensive abilities.

“I thought they were booing me.” – It was with relief, then, that Mason Mount realised it was the man who was replacing him against Montenegro, Joe Gomez (right), who was getting the dog’s abuse from the Wembley crowd.

“A few people call me this! It’s a cool nickname!” – Liverpool’s Fabinho on being dubbed ‘Dyson’ by Jürgen Klopp, presumably because he cordlessly hoovers up everything in midfield. And doesn’t need to be recharged every 15 minutes.

“It’s my alarm tone. I wake up to it every morning so I always get a perfect start to the day.” – Red Bull Salzburg’s Erling Haaland is woken by the Champions League theme tune each morning.

“It’s pretty obvious he’s not very good. He may have a clause in his contract which ensures he doesn’t have to dive for the ball. He doesn’t even look like a goalkeeper to me. He looks like an outfield player who has somehow found his way between the sticks.” – Apart from that, former West Ham goalkeeper Phil Parkes has every faith in the club’s current netminder, Roberto.