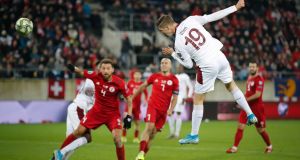 In a generally frustrating encounter for the hosts, it was left for the towering 22-year-old – playing in front of his home fans – to break the stubborn resistance of a plucky Georgia.

It also prevents a possible three-way tie after Monday night’s final two games, which would require Ireland to win by two goals against the Danes, rather than the straight shootout that remains on the cards. Switzerland travel to play face basement side Gibraltar in their final game.

Despite the absence of star striker Haris Seferovic, both Denis Zakaria and Ricardo Rodríguez had long-distance efforts turned away by Giorgi Loria in a bright opening for the Swiss.

Switzerland breathed a sigh of relief when Giorgi Kvilitaia hit the post from close range, before Loria denied Premier League duo Granit Xhaka and Albian Ajeti at the opposite end.

Georgia defender Otar Kiteishvili also cleared a Nico Elvedi header off the line and Manuel Akjani spurned another glorious opportunity as the sides proved inseparable at the interval.

The longer Vladimir Petkovic’s men went without securing a breakthrough, the more apprehensive they became. Conversely, the Georgian challenge gathered pace as the action progressed.

The lively Levan Shengelia fired just past the target off a swift counterattack and Valeri Qazaishvili also went close on 71 minutes. This was the cue for local star Itten to be thrown into the mix and it was a move that paid dividends.

Zakaria lofted a precise ball into the area, where Itten was ideally placed to head into the bottom right-hand corner.

1 St Michael’s conveyor belt showing no signs of slowing down
2 Glasgow slam European door shut on Munster
3 Premiership Rugby confirms Saracens will be relegated
4 Man City slip up at home to Crystal Palace
5 Welcome to Iten in Kenya – home of champions and cheats
Real news has value SUBSCRIBE
Crossword Get access to over 6,000 interactive crosswords