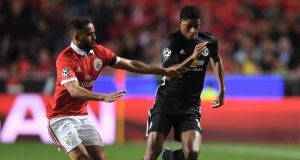 Watford are again without defenders Sebastian Prodl (thigh) and Younes Kaboul (hamstring) but there are no fresh injury problems. Midfielder Nathaniel Chalobah and defender Craig Cathcart both continue to recover from knee problems, along with forwards Isaac Success and Mauro Zarate.

Striker Steve Mounie could return to Huddersfield’s starting line-up after injury. Midfielder Philip Billing is waiting to learn whether he requires surgery on the ankle he twisted in last week’s defeat at Swansea, while Collin Quaner, Kasey Palmer and Michael Hefele are still out.

United forward Marcus Rashford is fit after limping off with a knee issue in the Champions League win at Benfica. Phil Jones is pushing for a return but midfielders Michael Carrick, Marouane Fellaini and Paul Pogba, defenders Marcos Rojo and Eric Bailly and striker Zlatan Ibrahimovic are injured.

Sergio Aguero could return for leaders City — the striker has been an unused substitute for the past two games after recovering from a broken rib sustained in a car crash. Captain Vincent Kompany (calf) continues to miss out, while left-back Benjamin Mendy (knee) is a long-term absentee.

Magpies striker Dwight Gayle picked up a calf problem in the draw at Southampton and, although it is not thought to be too serious, he will miss this game. Massadio Haidara is back in training after finally shaking off a knee issue but fellow full-back Paul Dummett (hamstring) is still sidelined.

Palace welcome back Wayne Hennessey and Ruben Loftus-Cheek — Hennessey missed the defeat of Chelsea with a calf injury, while on-loan Loftus-Cheek was ineligible against his parent club. The only absentees are strikers Christian Benteke and Connor Wickham, who have knee problems.

Saints forward Manolo Gabbiadini hopes to retain his place in attack after scoring both goals in the 2-2 draw against Newcastle. Full-back Jeremy Pied continues to work his way back to full fitness from a groin injury.

West Brom hope either Ben Foster or Boaz Myhill will be fit to keep goal — Foster (knee) missed the Leicester game and Myhill finished it with hamstring trouble. James Morrison, Oliver Burke and Hal Robson-Kanu remain out with muscle injuries.

Xherdan Shaqiri (ankle) is a doubt but midfielder Joe Allen is set to return from concussion for Stoke. Striker Peter Crouch (back) is another concern, defenders Bruno Martins Indi (calf), Ryan Shawcross (back) and Tom Edwards (ankle) are doubtful and Stephen Ireland (broken leg) is out.

Ryan Fraser must pass a late fitness test to feature for Bournemouth. The winger has a hamstring issue, while Brad Smith remains out with a hip injury. Striker Callum Wilson is not quite ready for a return after a second long-term knee injury and Tyrone Mings continues to battle a back problem.

Swans boss Paul Clement must change a winning team, with midfielder Leroy Fer banned after picking up a fifth booking of the season against Huddersfield. Fit-again Renato Sanches and Ki Sung-yueng are battling to replace Fer but striker Wilfried Bony is out with a hamstring issue.

Leicester caretaker boss Michael Appleton has no new problems to deal with. It remains to be seen if Appleton will make any changes to the team but he has the same squad to pick from, with defender Robert Huth (ankle) and midfielder Matty James (Achilles) still out.

Everton’s James McCarthy could make his first-team comeback having recovered from his knee injury and fellow midfielder Morgan Schneiderlin, who limped off during the Europa League loss to Lyon, is expected to feature. Wayne Rooney, Leighton Baines and Phil Jagielka are set to return to the matchday squad, along with Oumar Niasse, who was ineligible on Thursday.

Arsene Wenger will make changes after Arsenal’s Europa League win at Red Star Belgrade. The likes of Alexis Sanchez, Mesut Ozil and Alexandre Lacazette are in line to start but Danny Welbeck (groin), Calum Chambers (hip), Shkodran Mustafi (hamstring) and Santi Cazorla (ankle) are out and Wenger will hope both Laurent Koscielny and Aaron Ramsey will be fit enough to be in contention.

Danny Rose could return after a knee injury — he is unlikely to start but could be named among Spurs’ substitutes. Ben Davies has recovered from illness and Dele Alli is back after a Champions League ban but Mousa Dembele (hip), Victor Wanyama (knee) and Erik Lamela (hip) are out.

Liverpool captain Jordan Henderson is set for a recall, meaning James Milner could miss out despite his impressive midweek performance. Simon Mignolet will return in goal and Joe Gomez could come into defence as Jurgen Klopp continues to rotate his young full-backs.