Survival in sight for St Pat’s after Cork City comeback 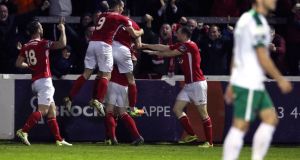 If the scoreless draw at Turner’s Cross in midweek disappointed those who wanted the title clinched with a little more panache, Cork City found themselves embroiled in something of a classic here in their first full game as champions.

They may not have much to brag about this season but St Patrick’s Athletic can certainly say that as push came to shove in their final home game of the campaign, they took a big step towards saving themselves and did it in style.

Two down and looking well on the way to a defeat against a much changed City side, Liam Buckley’s men battled their way back brilliantly to win what turned out to be a thrilling game 4-2. Goals from Jordi Balk and Billy Dennehy pulled them level before the break, with skipper Ian Bermingham and substitute Kurtis Byrne completing the escape act with 26 minutes remaining.

It is, of course, the prerogative of the champions’ manager to pick whatever team he chooses but the Dubliners’ relegation rivals will inevitably question John Caulfield’s decision to rest eight of Tuesday’s starters, including goalkeeper Mark McNulty, given the way things turned out.

The home side hauled themselves back into this with some spirited attacking football and were well worth their win for the way they pursued it in what was, at times, an end to end encounter, but it would surely have been unthinkable for City’s main men to concede four times; the only thing being that it might have seemed pretty implausible that they would have scored twice in the first place.

There may, of course, have been a certain lack of urgency about the southerners in the circumstances but then the hosts didn’t exactly look electrifying through the early exchanges with Buckley’s side starting slowly and looking, for a while, as if they intended to go on that way.

City were quick to capitalise. Ryan Delaney put them one up after 12 minutes when he applied a neat finish from close range after the locals made a poor stab at clearing a Shane Griffin corner. Caulfield’s men got a second in a league game for the first time since July when Kieran Sadlier scored with a spectacular shot from 25 yards seven minutes later.

The Dubliners looked dead and buried and their supporters were making little effort to keep the scale of their dissatisfaction under wraps. Buckley made his intention to chase the goals required to turn things around just over midway through the first half when he brought on Byrne for Paul O’Conor and steadily the home side started to claw their way back from the brink.

Balk’s goal was classic centre half stuff, a header applied to a corner from point blank range, but Dennehy’s equaliser three minutes before the break was another contender for what would be a hotly contested goal of the game competition with the winger stepping neatly inside his man out on the left before curling the ball beyond Alan Smith.

With Lukas Slowran looking endlessly vulnerable there seemed to be another goal or two there for the taking if City could get within shooting range. Ryan Delaney, though, tried his luck from inside his own half at one stage and it looked for a second as though the pot shot might have paid off.

The hosts kept at it, however, with Owen Garvan and Killian Brennan both helping them to edge things in midfield, while Christy Fagan’s passing and movement more than made up for the fact that he didn’t quite seem able to get into position to finish himself.

Having set up Dennehy for the second, the striker was at the heart of a terrific passing move for his side’s third although Griffin should have done better to prevent the final ball reaching the overlapping Bermingham.

That would have been enough but Kurtis Byrne applied to finishing touch with a wonderful header from 10 yards after Dennehy had crossed from the left. The news from Limerick, where Galway’s game was running well behind schedule, was far from conclusive but the sudden sense of confidence was clear here as the crowd chanted that they were staying up.

It does look that way after this win, but most were gone by the time Galway’s late goal ensured that they must wait a little longer for it all to be finally resolved.