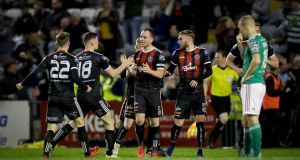 Bohemians inflicted a first domestic defeat on Dundalk’s since April to boost their European qualification prospects.

A goal in each half from Luke Wade-Slater and Andre Wright at Dalymount Park clinched a fully deserved win for the Gypsies, who require a point from their last two games to secure a place in the Europa League.

Substitute Michael Duffy, one of three regulars on the bench due to flu, pulled back a consolation for the league champions with the last kick of the game.

A crossfield pass by Danny Grant caught out Dane Massey and Wade-Slater slotted the ball past the advancing Gary Rogers from just outside the penalty area.

It was the first time for the Lilywhites to fall behind in the league since July and they should have conceded again in first-half stoppage time but Keith Ward fired wide.

From the one real chance they got between the two goals, Georgie Kelly wasn’t quick enough to capitalise on Bohs goalkeeper James Talbot spilling a right-wing cross.

Rather than Dundalk snuffing out a Bohs move on 64 minutes, Seán Hoare allowed the ball stray from his control and Wright took full control.

Though the striker was still 25 yards from goal, he rifled the loose ball low and hard under the grasp of Rogers.

Teenager Ross Tierney almost grabbed a third with a shot when he sliced wide before Duffy’s close-range finish at the death.

Harps striker Nathan Boyle was close to finding a breakthrough early on, but Hoops netminder Alan Mannus comfortably turned away his eventual strike at a tight angle.

Harps’ rigid 5-3-2 formation made life difficult for Stephen Bradley’s men, for whom teenager Neil Farrugia was making his debut on the left flank.

However, the dependable Mark McGinley came to Harps’ aid in the 57th-minute when he tipped Ronan Finn’s effort at an acute angle onto the post. He later produced an outstanding double save from Dylan Watts and Graham Burke, before Bolger fired to the roof of the net off the ensuing corner.

This was enough to give Rovers their 21st league win of the campaign and with Cork City getting the better of UCD on Leeside, Harps appear destined for a promotion/relegation playoff.

Cork City earned their first win under Neale Fenn as UCD’s relegation was all but decided at Turner’s Cross.

However, City’s first victory since August – and first at home since the triumph against UCD in May – wasn’t assured until the very end. While Conor McCormack put the hosts 3-1 up in injury time, Jack Keaney pulled one back for UCD from a penalty and in the 95th minute sub Danu Kinsella-Bishop almost grabbed an equaliser, his shot coming back off the post with Keaney firing the rebound over.

City led 1-0 at half-time thanks to Karl Sheppard’s opener, but early in the second half they needed goalkeeper Tadhg Ryan to make a double-save from Dara Keane and then Yoyo Mahdy.

Dáire O’Connor doubled the home lead on 64 minutes with a goal against his former club but UCD’s best performer Keane made it 2-1 on 72 minutes. Any hope looked to have been extinguished when McCormack re-established the two-goal City lead, but they had to hang on.

1 Owens’s comments increase tensions ahead of FAI senior council meeting
2 Leo Cullen says rotation will be key as Leinster look to keep on winning
3 Anthony Martial makes sure Lask don’t have the last laugh
4 Paul Stirling’s heart over head decision to play on for Ireland bears fruit
5 Harding Park, named after a lousy US president who never stepped foot on it
Real news has value SUBSCRIBE