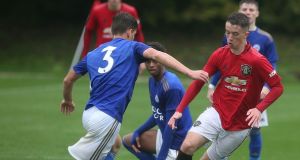 Phil Neville’s son Harvey and Borussia Monchengladbach’s Conor Noß have both been named in Tom Mohan’s under-19 Ireland squad for friendly games to be played against Denmark in Sligo over the coming week.

Neville, who qualifies to play for Ireland through the family of his mother Julie Killilea, is a winger at Manchester United, having previously been at Manchester City and Valencia. The 17-year-old moved to Old Trafford last summer.

Conor Noß (or Noss) is an attacking player at Borussia Monchengladbach where he has featured on the first team’s bench a couple of times over the past week for games against Basaksehir in the Europa League and Augsburg in the Bundesliga.

“Conor plays as a number 10,” said Mohan as he named the squad. “He was at our training camp (in September). He impressed us a lot. Technically, he is a very good player; he’s good on the ball, a good decision-maker and we were very impressed with him.

“He played in preseason with the Borussia Monchengladbach first team and he is doing very well over in Germany at the moment so we are excited about Conor.”

Also included in the group is Tottenham’s Jamie Bowden, a defensive midfielder who, like Troy Parrott, made his first team debut at Spurs in the club’s preseason. The 18-year-old Londoner, who has been with the club since the age of six, has actually been on the margins of the first-team squad since the tail-end of last season and has done well at various underage levels, having also played in central defence.

Mohan says the games at the Showgrounds, this Friday and Monday, are about getting to see the players available to him as he prepares for the European Championship qualifiers next month in Austria where, in addition to the hosts, the Irish will take on Switzerland and Gibraltar for one of two places available in the next round.

“It’s an opportunity for the players to impress,” he said of the coming week, adding that “we want attack, we want to score goals”.

1 Seán O’Brien: Anger over my parents’ break-up never left me
2 Ireland get the job done against Italy to keep alive Six Nations hopes
3 Ireland 50 Italy 17: Ireland player ratings
4 Hugo Keenan and Will Connors: The best of friends, the best of debuts
5 France warm up for Ireland with impressive win over Wales
Real news has value SUBSCRIBE
Crossword Get access to over 6,000 interactive crosswords