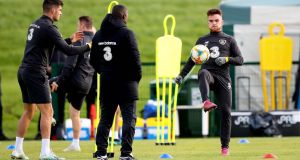 If Aaron Connolly makes his senior international debut in Tbilisi or Geneva over the coming days it will be another huge career landmark in a whirlwind few weeks for the 19-year-old from Galway. The benefits to Irish soccer, though, might extend well beyond these games or even this qualifying campaign, with other British clubs likely to take his progress as a reminder of why Brighton have been anxious to sign up young Irish talent in the past few years.

Aside from Connolly, Brighton have under-21 international Jayson Molumby from Waterford, who is doing well out on loan at Millwall, while former Bohemians defender Warren O’Hora is a regular for the Premier League club’s own under-21s, and James Furlong is settling into the under-18s, having signed in July from Shamrock Rovers.

Evan Ferguson, the 14-year-old striker who made headlines at home when he played for Bohemians’ senior team, first against Chelsea in a friendly, then in the league against Derry City, is heading there. The club, whose scout in Ireland, Leroy McCourt (bother of Paddy), is a well-known figure around the Irish schoolboy game, is also understood to be actively pursuing another handful of Irish teenagers.

Brighton’s connections with Ireland don’t end there. Londoner John Morling joined the FAI as player development manager from Peterborough United in 2005 and subsequently managed the under-16 and under-17 national teams before moving to the south coast of England club as academy manager in July 2012.

“Obviously, the time he spent here means he knows the Irish game very well, and he has been one of the few academy directors who sees that there is still a bit of quality to be had among our players,” says Will Clarke, director of football performance at south Dublin schoolboy outfit, St Joseph’s Boys, who had regular dealings with the Premier League outfit.

“As a club, their approach is slightly different to most in that they are – I know it’s a bit of a cliche – but that bit more holistic. They seem to appreciate that not all of the lads are going to go on to be professional footballers, and the things they offer in terms of education and supports tend to be that much more serious.

“They also look after the Irish lads particularly well. A lot of the clubs think that because they speak the same language and are only an hour from home on a plane, they are the same as the English lads, but at Brighton, they seem to recognise the cultural difference and go out of their way to help the lads settle.

Morling himself has touched on this aspect of the philosophy at the club. “We aim to produce good footballers but also good people,” he said last year. “Hopefully their experiences here will benefit them in the long run.

However, “Our ultimate goal is to get more and more players into our first team.”

That appears to have been at the heart of a long-term strategy put in place by chairman Tony Bloom, a former professional poker player, who took over the club a decade ago. He invested heavily in infrastructure, most obviously a new stadium, the Amex, but also a new academy, completed in 2014 at a cost of £20 million.

Frustration that all the time, money and effort put into the underage structures hadn’t resulted in more first-team football for home-grown talent may well have contributed to Chris Hughton’s departure at the end of last season. New head coach Graham Potter, the club’s technical director, Dan Ashcroft, suggested on BT Sport last weekend, is regarded as being more in tune with the “long-term vision” for the club set out by Bloom and the rest of the board.

The ambition, Ashcroft said, was to be a top 10 club, with top-flight survival an imperative. The philosophy that comes down from the top includes a firm sense of how the first team should play, while the model incorporates elements of “producing young players, recruiting a little bit differently and making our resources stretch a little bit further”.

All of that may have contributed to Potter’s decision to hand Aaron Connolly his start against Tottenham last Saturday. Brighton had not won a league game since the opening weekend of the season and had scored only two top-flight goals in six games. Other managers might have been briefing the press about how €30 million would be needed for a striker in the next window, but the Brighton boss started a 19-year-old up front against a side that made the final of the Champions League last season.

These are early days for the Galway man but the manner in which he made so much of his opportunity will be regarded as vindication for those involved at every level of the process that put him out on the pitch.

Beyond that, it should boost their ability to recruit future prospects by allowing scouts to point to the chance Brighton gave Connolly and, perhaps, rekindle the Premier League’s interest in Ireland.

“The players we are producing here are as good as they ever were, in my opinion,” suggests Clarke, “but when they are going to England the question of where they are most likely to get opportunities are huge so this is bound to help Brighton, not just here but everywhere.

“And hopefully, what’s happening, not just with Aaron at the moment but also with Troy [Parrott at Tottenham] and Adam Idah [at Norwich] will put on Ireland back on the map in terms of the Premier League. That would help the next generation coming through and create a bit of competition for our best young players, something that would give them better options and maybe allow the clubs that helped bring them through get the money they deserve.”

Aaron Connolly
After three years at the club, the Galway man has exploded into the first team and could well make his senior international debut over the coming days.

Jayson Molumby
Highly regarded central midfielder who is a key member of Stephen Kenny’s under-21 side. Currently on loan at Championship side Millwall, where he has been starting and playing well.

Warren O’Hora
Central defender who moved to the club after breaking into the Bohemians first team while still a teenager. Still only 19. He has scored a couple of goals for Brighton’s under-21s this season while also featuring for the 23s.

Matt Everitt
Surrey-born winger who was in the Irish squads for both the under-17 and under-19 European Championships over the past few months. About to turn 17.

James Furlong
Having been at St Joseph’s Boys, he had a spell at Shamrock Rovers, where the 17-year-old made a handful of first-team appearances. Stoke and Fulham were among the clubs reported to be interested before Brighton signed the teenager in the summer. Played for the under-23s a couple of weeks ago.