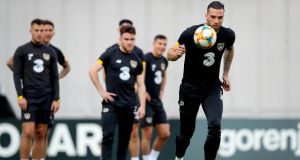 Shane Duffy during an Ireland training session at the Boris Paichadze Arena in Tbilisi ahead of Saturday’s Euro 2020 qualifier against Georgia. Photograph: Ryan Byrne/Inpho

Mick McCarthy has confirmed that he intends to start Shane Duffy in Saturday’s European Championship qualifier against Georgia with the Ireland manager suggesting it would be “bonkers” not to.

Duffy joined up with the squad on Wednesday and McCarthy says that actually he prevented the big centre back from training before the squad flew on Thursday after learning how much work he had done at Brighton over the previous three days.

The Derryman has, he suggested, done more than enough to prove his fitness at this stage and he was expected to take a full part in the squad’s final pre-match session at the Dinamo stadium in Tbilisi.

“He’s fine,” says McCarthy. “He turned up but I wouldn’t let him train yesterday. He asked ‘why?’, and I said, ‘because I said so’.

Pressed on whether the 27-year-old is actually match-fit, McCarthy was adamant. “If you’re looking for one starter, then Shane Duffy . . . He’s just been outstanding. I’d be bonkers to leave him out.”

The issue of who plays up front seems rather less certain but McCarthy seem inclined to give James Collins a chance from the kick-off despite having previously suggesting that Aaron Connolly will feature at some point over the course of the evening.

“He looks every bit the international player with us,” he said. “And there’s no point in having the lads in if I don’t trust them.

“He’s as mentally strong as any of the others that we could play up front. He’s been around a long time and he has scored wherever he has been, James. I think to get into the international squad now shows a lot of dedication.”

McCarthy cited Georgia’s draw with Denmark last month repeatedly as evidence of the threat the home side can pose and said that he didn’t quite understand why some people seemed the game as something of a foregone conclusion.

“They have nothing at all to lose,” he continued, “so they can be that more relaxed; we still have a chance to qualify. But will they be blase? I don’t think so. They will be desperate to beat us. They already have a playoffs spot as I understand it and they will want to build up towards that.

“We have come here to win this match but if we end up with a draw then we are going to have to be happy with that.”

The Georgians are, right enough, already thinking in terms of a Nations League playoff in the spring, although their manager, Vladimir Weiss, said here that he is not sure whether he will still be around at that point. He said that a win here would be a boost to confidence as the team looks to qualify for a first ever major championship by that route but that it would not be easy against a side that plays football “like Michael Flatley dances”.

“They are a phenomenal team whose passion is unbelievable,” he said. “Like Michael Flatley dances. I like it. But we have some players who can dance too. We will see who has the better dancers tomorrow.”

2 Regrets for Munster as Leinster find a way, again