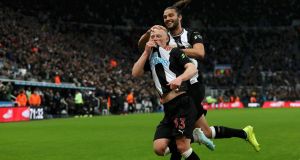 Maybe, just maybe, Steve Bruce and Newcastle United might not be heading for divorce after all. Perhaps the home manager’s bravery in offering 19-year-old Matty Longstaff his Premier League debut, alongside his older brother Sean in central midfield, will one day be regarded as a watershed.

Whatever the future holds the Longstaff family will never forget the day tears tumbled down Matty’s cheeks after he scored a wonderful second-half winning goal to simultaneously relieve the growing tension on Bruce and increase the pressure on Ole Gunnar Solskjær.

Manchester United’s manager watched in dismay as his side exhibited an almost painful lack of invention, improvisation and incision in the course of another horribly ponderous, at times almost slow-motion performance in the north-east rain.

Last Sunday night Newcastle flew back to Tyneside in silence after a 5-0 thrashing at Leicester but a week on it was Manchester United’s turn to endure what must have been an excruciatingly uncomfortable plane ride home across the Pennines. Back on terra firma how Bruce must have celebrated his first managerial victory against the club where he once proved a bedrock of Alex Ferguson’s defence.

Many of those inside St James’ will have been old enough to recall the era when battles of these two Uniteds were central to Premier League title races but times have changed and they met in much reduced circumstances.

True, Newcastle’s plight was, by some distance, the more significant but Solskjær’s side arrived not only marooned in mid-table but without an away win since March.

At kick-off mid-table anonymity would have represented nirvana for Bruce as he presided over his 400th Premier League game and deployed a game plan bearing the fingerprints of Rafael Benítez.

Under Benítez last season Newcastle thrived in an immaculately drilled 3-4-3 formation and, with Bruce’s attempts to modify that configuration having produced a series of disappointing results, culminating with that Leicester thrashing, he reverted, reluctantly, to the Spaniard’s blueprint.

Newcastle immediately looked much improved from a week ago with Allan Saint-Maximin’s left-sided advances repeatedly ruffling Manchester United and Matty Longstaff looking very much at home.

Only the woodwork came between him and a first-half goal after he met a short pass from Saint-Maximin, took a touch with his left foot and then unleashed a sublime right-footed 20-yard half-volley which hit the crossbar.

Not to be upstaged, Sean Longstaff – apparently targeted by Manchester United last summer – whipped in a corner for Fabian Schär to head narrowly off target. Newcastle fans subsequently wanted Scott McTominay sent off following a late high tackle on the older Longstaff sibling but a VAR review decreed that the yellow card issued by Mike Dean had been the right decision.

At this stage Manchester United had still to register a shot on target but that finally changed in the 42nd minute when Andrea Pereira directed a long-range effort straight at Martin Dubravka. With Solsjkær’s players retaining quite a bit of possession but doing precious little with it, Newcastle’s counterattacking tactics afforded them a much more menacing look but Bruce’s defence very nearly paid the price for losing concentration at a set piece.

Maybe Manchester United’s recent incompetence at dead balls had lulled them into a false sense of security but the marking was inexcusably slapdash as Harry Maguire all too easily lost Schär before connecting with Ashley Young’s excellent corner. Positioned around four yards out Maguire seemed certain to score but instead somehow headed wide.

If that represented a reprieve for Bruce, Solskjær seemed to be ageing by the minute as Saint-Maximin enjoyed the freedom of St James’ and looked mighty relieved as Miguel Almirón seamlessly controlled a dropping ball and appeared odds on to test David de Gea only to hesitate at the vital moment and permit the visiting defence to regroup. It was merely the latest in a series of such cameos from a forward who seems to have developed a mental block about goal scoring since arriving on Tyneside.

Marcus Rashford made an even more minimal impact, barely touching the ball in a first half when, admittedly, the striker invariably found himself isolated.

There is no danger of Andy Carroll walking alone on Tyneside and, sure enough, the returning local hero was cheered to the rafters as he replaced Joelinton early in the second period. By now Rashford had been relocated to his left-wing comfort zone but Carroll had no qualms about assuming the classic No 9 role from where he revelled in discomfiting Maguire and co.

If nothing else Carroll invariably offers nuisance value and Bruce needed plenty of his distracting potential at a juncture in the game in which the power balance seemed to finally be tilting in an improved Manchester United’s direction.

The substitution worked a treat, although the closest Carroll came to actually scoring featured a header which whizzed wide. His disruptive presence served to galvanise teammates and, shortly afterwards, Longstaff scored.

It began with Saint-Maximin’s acceleration from the halfway line which involved the former Nice winger sashaying beyond assorted markers before picking out Jetro Willems. He held off more opponents before skilfully cutting the ball back for Longstaff to shoot crisply and cleanly beyond De Gea from 22 yards before promptly bursting into tears.

The expression on Bruce’s face confirmed that a week really can be a very long time in football.