Northern Ireland dare to dream before nightmare finish in Rotterdam 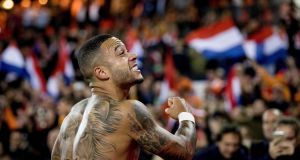 Netherlands’ Memphis Depay celebrates with supporters after the victory over Northern Ireland at the Feyenoord stadium. Photograph: Koen van Weel/ANP/AFP via Getty Images

Northern Ireland suffered heartbreak in Rotterdam as the Netherlands scored twice in stoppage time to snatch a 3-1 victory which leaves Euro 2020 qualification hopes hanging by a thread for Michael O’Neill’s men.

Josh Magennis’s 75th-minute header had Northern Ireland dreaming of a victory which would have ranked among their greatest results, but it all fell apart late on.

Memphis Depay levelled for the Dutch just five minutes after they fell behind, and then scored his second of the night in the fourth minute of stoppage time after Luuk de Jong scored the second.

It was brutally cruel on Northern Ireland, who had battled bravely for 90 minutes and looked like they would be rewarded with a point which kept them firmly in the conversation to reach next summer’s finals.

But instead they ended the night third in Group C, level on points with the Dutch and the Germans, who have both played a game less and who will both face Northern Ireland next month.

Ronald Koeman had warned his players to prepare to face “fighting machines” and they soon realised what he meant as O’Neill’s men pressed high and harassed their hosts into mistakes in an uncomfortable opening period.

Kyle Lafferty, without an international goal since November 2016, started as the lone striker, tasked with facing a central defensive pairing of Virgil van Dijk and Matthijs de Ligt.

He epitomised Northern Ireland’s battling spirit as he ran himself into the ground, and though it did not translate into chances or even sustained possession, it was what O’Neill was talking about when he said he wanted to sow doubt in Dutch minds.

Koeman had also voiced concern that his players had looked lethargic in training in the build-up to the match, and it was noticeable that they struggled to move the ball with much pace in the first half, allowing Northern Ireland to snuff out the danger in midfield.

The net result was that they did not even manage an effort on target until the dying moments of the first half when Georginio Wijnaldum’s tame header was gathered by Bailey Peacock-Farrell on the line.

Wijnaldum, who had also seen a shot charged down by Stuart Dallas in the first half, was the first to get a sight of goal in the second after a driving run from Memphis but sent it wastefully over.

The Dutch were playing with much greater urgency, and moments later the ball almost fell for Denzel Dumfries at the far post as they threatened again.

The best opportunity came in the 68th minute when Memphis flicked a short ball over the Northern Ireland defence to find the run of Steven Bergwijn, who forced a save from Peacock-Farrell at close range.

Northern Ireland were living dangerously and the Netherlands immediately pushed forward again. Wijnaldum’s hooked effort at the far post was over Peacock-Farrell but Jonny Evans was back to head it away.

And then, out of nothing, Northern Ireland scored with their first effort on target.

De Ligt sliced a clearance horribly and Daley Blind failed to deal with it. Dallas dug out a cross and Magennis – just on for an exhausted Lafferty – headed in.

It sparked scenes of delirium amongst the 3,500 travelling fans and a shocked silence amongst the orange-clad home supporters.

But it would only last for five minutes as the Dutch scored with the sort of crisp passing missing for so much of the night in the final third.

Donyell Malen’s square ball found Memphis who had a simple task to poke it beyond Peacock-Farrell.

Then it all unravelled for Northern Ireland in stoppage time.

De Jong got his first effort wrong at the far post but when Peacock-Farrell missed the ball he had the easiest of finishes to put the home side ahead.

And then, with virtually the last kick of the game, Memphis rolled in a second off the post.

1 Seán O’Brien: Anger over my parents’ break-up has never left me
2 Ireland out to make a bold statement of intent against callow Italian side
3 Six Nations - Ireland v Italy: Kick-off time, TV details, team news, standings and more
4 Matt Williams: Ireland’s strategy of ‘heads up attack’ will not work without strategic thinking
5 Ireland entitled to feel at home with sparing use of residency rule
Real news has value SUBSCRIBE
Crossword Get access to over 6,000 interactive crosswords