‘Why on earth would I call them in? I just think that that would be wrong of me’ 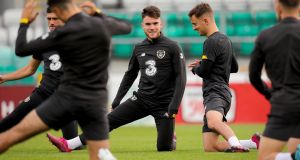 Mick McCarthy says that he is happy to see the next generation of Irish players continue their development with a competitive game in Sweden rather than being brought into the senior squad for Tuesday evening’s friendly game against Bulgaria.

The manager said that he would have included a number of Stephen Kenny’s players in his squad had they not had another qualifying game to focus on. But he said he was far from sure whether he would have learned as much from seeing them up close in a game like this as he will from the test the Swedes will provide for them.

“Have they got a qualifier tomorrow? Then why on earth would I call them in? I just think that that would be wrong of me. I was extremely impressed, certainly by (Aaron) Connolly, I thought he was the pick of the bunch the other night; (Jayson) Molumby too and I have a soft spot too for centre backs, I liked both of them (Dara O’Shea and Conor Masterson), they where both competitive, they could can play, they both could pass the ball.

“I hope they get playing regularly (for their clubs) and I hope that they give me that dilemma when they are playing but I’m not sure that Georgia away, Switzerland away, Denmark at home, are games for debutants.

“And it’s always the case that if I did do that and they didn’t play well then that question would be asked. I’d like to have the dilemma, of course, that would come if they were playing in Premier League games or Champions League games but at the moment they are not.”

Even without the likes of Connolly and Molumby, McCarthy is expected to make wide-ranging changes to his starting line up for the game on Tuesday evening with several of those who have been obliged to look on from the sidelines as he has stuck with a very settled side in the qualifiers played so far likely to be given run outs.

McCarthy acknowledged that Bulgaria were very well beaten on Saturday by what he regards as a good England side but he expressed the hope that his players will get a competitive game under their belts before heading back to their clubs where some are struggling to get first team football.

“I watched most of their game against England,” he said. “England are a very good side; Bulgaria, I don’t know, whether they just tried to sit back but they were well beaten. Somebody told me that the best players they have have been taken out of the squad and put with the 21s who they want to want to qualify.

“They will pose a threat, though. They have just had a competitive game and on our side I am looking for that competitive edge that the other lads have just shown us. The players who have not been playing, they will be busting a gut to be playing as much as they possibly can so that if some of the others play poorly or are injured next month then they can stake their claims.”