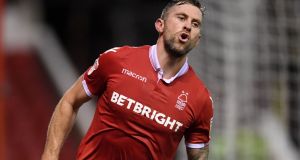 Republic of Ireland striker Daryl Murphy has signed for Bolton Wanderers until the end of the season after the remainder of his contract at Nottingham Forest was cancelled to facilitate the move.

The 36-year-old scored six times in 32 appearances for the Championship club last season but had not featured since the summer under new manager Sabri Lamouchi. The new owners of Bolton have been frantically assembling a new squad after having saved the club from liquidation last week, signing nine players before the League One transfer window closed on Monday.

Elsewhere, a number of Irish players went out on loan in order to secure more regular first-team football. Jimmy Dunne and Conor Shaughnessy have moved from Burnley to Fleetwood Town and Leeds United to Mansfield Town respectively. Dylan Connolly has joined Bradford from AFC Wimbledon until the end of the season and Ryan Delaney has joined Wimbledon from Rochdale.