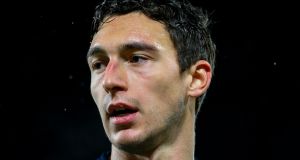 Matteo Darmian: made 92 appearances for Manchester United in all competitions. Photograph: Getty Images

Manchester United defender Matteo Darmian has completed a move to Italian Serie A side Parma on a four-year deal, the Premier League club said on Monday.

Italy international Darmian, who arrived at Old Trafford from Torino in July 2015, made 92 appearances for United in all competitions, helping them to the FA Cup in his first season. But the 29-year-old full back made only seven appearances for United last season and has not played at all this term under manager Ole Gunnar Solskjaer. British media reported United will receive €1.5 million for the versatile defender, who had one year left on his contract.

“Everyone at Manchester United would like to thank Matteo for his service and wish him all the best for the future,” United said in a statement.