Bohemians reach out to fans with visual impairment 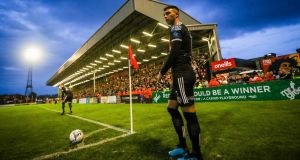 Bohemians’ Daniel Mandroiu at the FAI Cup first round match against Shelbourne at Dalymount Park, Dublin, in August. The stadium is to become more accessible to visually impaired people. Photograph: ©Inpho/Ryan Byrne

Bohemian Football Club is to team up with the National Council for the Blind Ireland (NCBI) to pilot a project intended to make live football more accessible to supporters of the game who are visually impaired.

The scheme, which is common in many bigger leagues abroad, involves tailored commentary being provided by visual impairment specialists to small numbers of fans using ear pieces. The commentary comes in through just one ear in order to allow the crowd and match noises to be heard through the other and the intention is to allow users of the service to enjoy games they might not otherwise be able to completely follow.

The hope is that if the trial goes well over the remaining four home league games of Bohemians’ season, the possibility of involving other clubs can be explored. “We are going to use it as a pilot scheme that we can then evaluate,” says James Flanagan of NCBI. “You want people with sight loss to be able to access football, you want them at games and if things go well, then hopefully it will get other clubs thinking.”

It was Flanagan who approached Bohemians with the idea but the club, which has been involved in a number of innovative social initiatives in recent seasons, reacted enthusiastically, seeing it as a way of reaching another part of its fanbase and wider community that would routinely struggle to get to games or, if they go, to get the most out of them.

“James came to us and we thought it was brilliant,” says club director Daniel Lambert. “As a club, we know of supporters who are in this position but beyond that, it is a way of making Dalymount Park more accessible generally. We have done a number of things over the last few years to make the place more inviting to people and the reaction has always been very positive. We really can’t see a downside to this; we’re very excited about getting it up and running and very lucky to have someone who is locally based and prepared to deliver the service for us.”

The scheme will initially be aimed at providing commentary to groups of up to 10 people and Flanagan, who works with the NCBI at its centre in Drumcondra, says a couple of the service users there have already signed up.

“We have a couple of people there who are very keen,” he says, “and it would be great to have at least four or five involved just to see how we get on.

“As things stand, we are aware that many people with a visual impairment go to games at Croke Park or the Aviva stadium and listen to the radio to help them follow the games. Obviously, that can only really done with the biggest sporting events because you need live commentary to do but this goes a bit beyond that.

“What visual impairment specialists are trained to do is to try to describe more of what is happening, not just on the pitch but in the stand and in the dugouts. You are trying to enhance the user’s general sense of the occasion. They might have enough sight to be able to broadly follow the action and so what you are trying to do is to add to that to make the whole occasion more accessible and enjoyable for them.

“The intention is also to personalise the service and so I will sit down and chat to every person who I am going to be working with because the information I provide during commentary would usually be based on factors like their knowledge of the game, their particular likes and favourite players. There could be someone who avails of the service who has a relation on the team who they would have a keener interest in. These factors will all come into play. The aim is to tailor the commentary to suit each individual’s needs.”

Flanagan, who has been working with the organisation for the past year or so, is one of 850 staff at NCBI which helped 6,392 of the roughly 55,000 people living with serious visual impairment or blindness in Ireland last year. While the football initiative is close to his heart, the organisation’s work includes awareness training, accessibility assessments and support to businesses and other organisations.

The football service, he says, fits in with the organisation’s general belief that disability should not be a barrier. “They do this at clubs in the Premier League and Celtic do it and it would be great if the pilot with Bohemians is a success and the scheme could expanded to help more people with sight loss enjoy the sort of sporting occasion that most of us take for granted.”