Ken Early: Irish fans are like elderly Brexiteers – stuck in the past

Our football is stuck in the past, and there seems to be no going back to the future 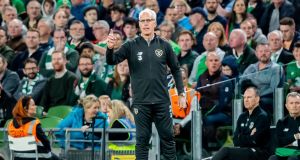 Georgia on his mind: Republic of Ireland manager Mick McCarthy at their Euro 2020 qualifier against Switzerland on September 5th. Photograph: Morgan Treacy/Inpho

Everyone could use a friend like Georgia. That proud football nation of the Caucasus has for many years been the Irish team’s travelling companion and ally, many times hobbling our rivals and – until the end of the doomed World Cup 2018 qualifying campaign – always dutifully coughing up three points against us.

Georgia’s clean sheet against Denmark is like a collective version of the Gary Mackay goal against Bulgaria . . . And there we go again, referring back to something that happened in 1987.

Will we ever stop doing this? On Thursday night at the Aviva, Mick McCarthy said of the Republic of Ireland equaliser: “When the goal went in, it was like the days of old, Jack’s days, my days in qualifying for the World Cup.”

On one level it’s quite natural Mick should link the happiness he felt at Thursday night’s equaliser with happy memories from his own past career with Ireland. But it’s also a bit weird we still regularly talk about Jack and a World Cup campaign that happened nearly 30 years ago. In 1989, when Ireland qualified for that World Cup, nobody was harking back to the 1950s. In those days we were still living in the moment.

Football-wise, Ireland has been stuck in the past for a long time, mostly because more recent years have been so meagre. When Irish football fans think about the World Cups of 1990 or 2002, we’re like elderly Brexiteers remembering the good old days before the empire dissolved and the sterling was decimalised and their knees started to make that awful crunching sound whenever they get up.

If you’re looking for the main reason why we’ve been trapped in this timewarp, then the latest illustration of it appeared in yesterday’s Sunday Times. There were details of John Delaney’s James Bond-themed 50th birthday party, which featured ice sculptures, pyrotechnics and costumed waiters serving a 200-strong crowd that included grandees from the worlds of football, politics and entertainment.

It looked like an attempt to recreate the atmosphere of the Gerald Kean parties of the late Celtic Tiger, and reminds us Delaney respected and was attracted to celebrity above all things. He seemed to feel validated when treated like a celebrity by Sunday magazines, or ironically serenaded by travelling Irish fans in bars across Europe. He was reassured by the presence of celebrity and clung to it like a comfort blanket. Looking back, Irish football never really had a chance.

When he took over, Delaney inherited a progressive coach in Brian Kerr, who had performed brilliantly at youth level and creditably at senior level, but suffered from low name-recognition in the football world outside Ireland. He swiftly dispensed with Kerr in favour of a recently-retired playing legend, Steve Staunton, whose coaching methods were based on what he had observed at Liverpool in the early 1990s. These were the fading years of a Boot Room regime that had hardly changed since the 1960s.

After Staunton didn’t work out, Denis O’Brien offered support in the form of financial assistance to pay the salary of a big-name manager. At the time this seemed like a coup for Delaney and was generally received as a positive development. We probably should have realised that raising the salary to the point where it became attractive to celebrity managers who otherwise wouldn’t have had any interest might not actually be a very good idea.

So, as the rest of Europe was watching and learning from the new football being played in places like Barcelona and Dortmund, Ireland were coached by Giovanni Trapattoni, Il Trap, who was at once one of the biggest names in the history of the game, and a coach who was already considered a football reactionary in Italy by the end of the 1980s.

Trap ran the sort of regime that had worked for him when he was managing Italy’s most powerful club in the 1970s and early 1980s – a world where anyone younger than 27 was considered a juvenile and full-backs who crossed the halfway line were dangerous renegades.

Eventually Trap gave way to the dream team of Martin O’Neill and Roy Keane – an Irish managerial legend, assisted by the most famous and charismatic player the national team has ever had. Celebrity-wise, the combination was unbeatable. When it came to the actual coaching, however, their methods turned out to be, if anything, even more antiquated than Trap’s.

At least Trapattoni was very clear about what he wanted the players to do out on the field, even if what he wanted them to do did not in any sense resemble modern football. O’Neill would name the team an hour before the game and there were times when they would have to confer to guess where exactly they should be playing and what they ought to be doing.

This way of doing things had worked well for Brian Clough 40 years before, but today’s players are used to receiving more in the way of specific instruction. That’s not because they are soft-brained millennials who have been pampered by life and have never developed the initiative or knowhow to take the game by the scruff of the neck like the hairy-chested legends of old. It’s because today’s football is more complex and collective than the game of the 1970s, and teams that don’t have much of a plan don’t have much of a chance either.

When the O’Neill era finally exhausted itself, Irish football was crying out for a modern coach to drag us into a future that seemed to be getting further and further away. But Delaney’s overriding concern was to qualify for Euro 2020 where, as leader of a host association, he would mingle with VIPs from all over Europe. So Stephen Kenny, the obvious outstanding candidate, was signed up for the future, but Euro 2020 was entrusted to Mick McCarthy, the bigger name.

Kenny’s Under-21s are looking good. Look at the craft of the winning goal against Armenia on Friday: Aaron Connolly beating his man, looking up, seeing Adam Idah go to the near post and cutting it back to Troy Parrott, who is arriving unmarked to sidefoot it in . . . For the first time in a while it feels like the future might be about to arrive. As for the here and now, well, we’ve always got Georgia.