Pauw has managed Scotland, Russia and her native Holland as well as earning 89 caps 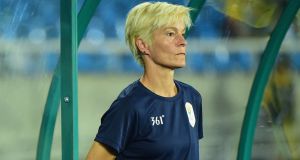 The FAI have announced that former Scotland, Netherlands and Russia manager Vera Pauw is to succeed Colin Bell as the head coach of the Irish women’s team. She takes over with immediate effect from Bell’s former assistant Tom O’Connor who had stepped in for the friendly game against the USA and Tuesday’s Euro2021 qualifying win over Montenegro.

Pauw, 56, from Amsterdam, played 89 times as a defender for the Netherlands over the course of a 15-year international career. She subsequently managed the Scots for nearly six years before landing the Dutch job.

Under her management, the team qualified for a major championship for the very first time in 2009 when they went all the way to the semi-finals of European Championships. She left the following year and since then she has had spells with South Africa and Houston Dash as well as with the Thai national team in an advisory role.

“I am very excited at the prospect of managing the Republic of Ireland Women’s National Team for the remainder of this European Championship campaign and I believe we can achieve very positive results together,” she said in an interview with the FAI’s own website.

“I was impressed with what I saw versus Montenegro and I want to wish Tom well for his future career and thank him for the excellent job he has done with the Ireland team in recent weeks.”

FAI General Manager Noel Mooney said the appointment is a positive one from the association’s perspective. “We worked extremely hard to find the right coach to give our squad the best opportunity possible to qualify and we have found the right candidate.

“Vera’s career in her native Netherlands, Scotland, South Africa and in other parts of the world demonstrate her standing as a pioneer of women’s football. We hope Vera will lead our squad to our first major senior championships and will further the growth of the women’s game here in all areas.”

The appointment ends a protracted search for the organisation which had originally been expected to appoint former underage team manager Dave Connell to the position. If that had indeed been the intention, the association was forced into a rethink when Megan Campbell suggested an internal appointment would be seen by players as a backwards step and might prompt retirements.

A number of high profile candidates are believed to have turned the position down, apparently on financial grounds. Pauw’s first game in charge will be the visit of Ukraine to Tallaght on October 8th.