Michael Walker: Race to the bottom starting to gather pace 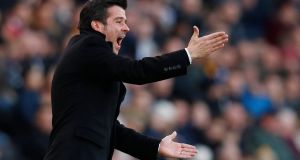 Marco Silva has managed to turn things around since replacing Mike Phelan as manager of Hull City. Photograph: Phil Noble/Reuters.

Marco Silva may not have been in England long enough to have heard of Roy Keane’s retelling of the Alex Ferguson three-word team talk when Manchester United were supreme and Spurs were not.

Today Marco Silva takes his new, improved Hull City side to north London, where Arsenal lost their last home game, against Watford. That was before last Saturday’s all too predictable defeat at Chelsea.

Arsenal look ordinary and with a trip to Bayern Munich next week, Arsenal look pre-occupied. In short – three words – Arsenal look Arsenal. But this is about Hull, and a relegation race that is suddenly competitive.

What Hull City and Sunderland did last Saturday with their victories over Liverpool and Crystal Palace was kick-start a nervous 14-game sprint to the cut-off line.

What Hull can do at Arsenal is not just squeeze Arsène Wenger, they can rattle the eardrums of those directly above them.

A win at Arsenal and Hull will be out of the relegation zone. This is a team some of us thought were certainties to go down. Even a point might get Hull up to fourth bottom, depending on what happens at Swansea.

If, if, if, we’ve got there early this season – permutation land. We’re there because, while Chelsea streak away at the top (impressively), we can contain our fascination with who comes second, third and fourth.

It’s of interest, of course, but Arsenal’s continual European anti-climaxes have been franked by Tottenham’s this season. All that effort to qualify; now Spurs face Gent in the Europa League.

Both Hull and Sunderland remain favourites to go down but four points each from their last two difficult-on-paper matches have brought uncertainty elsewhere.

Silva had a taste of “Marco who?” when he walked through the doors at Hull a month ago. Mike Phelan, who did a solid job in the circumstances, left after referring to some “pretty boy” defending in a defeat at West Brom.

Silva appears to have agreed with that assessment given the stories of him dragging centre-half and captain Michael Dawson around at his first training session.

It has had an effect: having kept one clean sheet in the previous 22 league matches, Hull have two in two.

That may not prevent Arsenal breaking through, but after today Hull have only Manchester City to visit of the current top six.

Tottenham, at home on the last day of the season, are the only other top-six side Hull have to play. Eight of Hull’s last 13 games are against bottom-half clubs, four of which are at home – Burnley, Swansea, Middlesbrough and Sunderland.

If, like last season, 37-38 points are needed to stay up, Hull must win those to maintain the chance they’ve given themselves.

Selling Robert Snodgrass while bringing in the likes of Lazar Markovic might not have been everyone’s recipe for survival. But it might work.

David Moyes’s tactic of signing players from his former club was also questionable. It meant the joke on Wearside was that Sunderland will soon be suffering from post-traumatic Everton disorder. But the the five former Goodison men who appeared at Selhurst Park were part of a victory that has Sunderland signing a familiar refrain.

As Seb Larsson said after the win at Palace: “This reminds me of playing Norwich away last year, it was played in similar circumstances. We could drag them in by winning and we have done that.

Norwich were four points ahead of Sunderland at this moment last February; they finished five points behind.

So it’s a six-horse race, possibly eight, depending on how Bournemouth and Southampton react to to their current downward form.

Southampton have lost six of their last seven. Bournemouth have just conceded six at Everton and have five points from the last 24. They host Man City on Monday, then go to West Brom and Old Trafford.

Momentum from below could see both south coast clubs dragged closer. Hull, Sunderland and Swansea have it, Palace, Leicester and Hull do not. Nor do Middlesbrough.

Leicester’s demise is the most dramatic in generations. It would be no surprise to see them lose at Swansea – the champions’ away form is the second-worst in the Premier League. They have only eight goals away from home.

At home, though, Leicester have 18 points. They have Hull, Sunderland, Stoke and Bournemouth yet to visit. That is their safety net.

Palace’s next home game is against Middlesbrough, a relegation nine-pointer, as they say, but Palace’s run-in is arguably the hardest.

Boro’s is not too easy either – United, City and Arsenal at home (where Boro average less than a goal a game) and Chelsea and Liverpool away. At this stage Palace and Boro look the most likely to be facing Scunthorpe in the Championship next season. But we can’t be sure.

As Jamie Carragher might note, Hull and Sunderland have done the Premier League quite a favour. They have returned some intrigue and tension to a division where, for too long, clubs like Arsenal have been compensated for what’s become known as “elite mediocrity”.

Everton still have a lot to prove

Part of that not-quite-sure feeling we have about the bottom eight extends to Everton: What are we to make of them?

Everton began the season with a creditable 1-1 draw with Tottenham in Ronald Koeman’s first game in charge. Then came a burst of wins so that, five games in, Everton were second. Only rampant Manchester City kept them off top.

What followed was a run of one win in 10, including a 5-0 loss at Chelsea. After defeat at Watford in December, Koeman’s evolving team had dropped to ninth. There was then a painful 1-0 home loss to Liverpool.

But since that late, late defeat, Everton have played seven, won five, lost two. They are top of the “last six” form table and will not be daunted by a trip to low-scoring Middlesbrough. After that, it’s Sunderland at Goodison, David Moyes and all.

Following the defeat by Liverpool, Everton were 11 points off fourth, now it’s seven.

The blue season has been good-bad-good. We await the next instalment. Everton are not far off. They need to prove it.