John Caulfield: Shamrock Rovers will not settle for second best 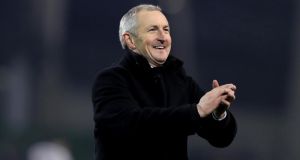 Cork City boss John Caulfield has dismissed the suggestion by his opposite number at Shamrock Rovers that overtaking the southerners to finish second behind Dundalk would be seen as satisfactory progress toward a title further down the road for the Dubliners.

“He [Stephen Bradley] might be saying that they’re not expecting to go out and beat Dundalk but you can rest assured, they’re expecting to win the league title with the investment that they put out there,” says Caulfield. “We’ll see how it pans out. We signed a lot of players last year and they gelled quickly. Stephen needs that this year or he’ll be under a lot of pressure to deliver.

“Stephen has come in and the club has spent lots of money. They have offered incredible contracts. They took Ronan Finn from Dundalk which wouldn’t strike you as making sense in football terms but financially it was an incredible deal. They have changed their whole policy. Two years ago it was all about youth; bringing young players through to the first team but that’s all scrapped.

“This year it’s about signing a whole new team, paying big money to go straight out and try to win a title. It’s going to be very interesting to see how it pans out. But good luck to him. All John Caulfield and City are interested in is that we are better than last year and hopefully that will be enough for us to stay at the top and maybe win the title.”

The club has, he says, sought to add quality while cutting numbers slightly and Caulfield feels that the new arrivals are settling in well with Shane Griffin, the most recent recruit, having featured in Wednesday night’s 3-1 win over Cobh

“They’ve all settled in really quickly which is what you need, although the fact that they are familiar with the league certainly helps. I would certainly hope that we’re strong enough to maintain a challenge right through the season.

“I thought last year we were very close. If you look at the three games with Dundalk, we won two and they won one but it boiled down to that Tuesday night game in Oriel and they won that.

“There was very little between us so you are hoping that the few lads that you bring in will push you over the line. That said, you need your top players from last year to do it again, to show the required hunger and I’m just hoping that winning a bit of silverware, beating Dundalk in the cup final will give everyone the confidence to drive on.”